Pope Francis and the kooky commentaries to come 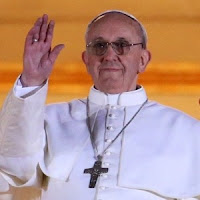 A new pope. A Jesuit. An Argentinian. Even now the fruit loops who write for certain non-Catholic fringe sectarian publications, and the suited pundits who preen and strut in their pulpits, are preparing weighty prophetic commentaries to dazzle and impress their readers and/or dutiful pew potatoes with their deep understanding of what it all means.

It happens every time a new pontiff is elected. Is this the last pope, or maybe the last bar one? Is he the one mentioned in Revelation, or perhaps Third Calathumpians? Watch world news brethren, time is short, prophecy is being fulfilled before your eyes, we may just have three to five years before the Tribulation strikes. Exclamation mark alert - we have incoming!

You just know Pope Francis I will appear on the front page of The Good News, Tomorrow's World or The Philadelphia Trumpet (my prediction is at least two of the above, but I wouldn't be surprised by a trifecta.) In-house hacks will pontificate (if you'll forgive the pun) ad nauseum.

And it's all rubbish. A mismatched confection of misread proof texts. And so very, very predictable.

Doubtless the election of Francis I is significant. Given the size and influence of the Catholic church that's hardly a surprise. But Gerald Flurry, Rod Meredith and whoever is currently churning out the prophecy-filling for The Good News have absolutely no inside knowledge or insight to share. None. They're bluffing and posturing or, to take a more charitable line, trying to convince themselves that they know things they don't.

The jackasses are about to bray. Grab your ear plugs while you can.