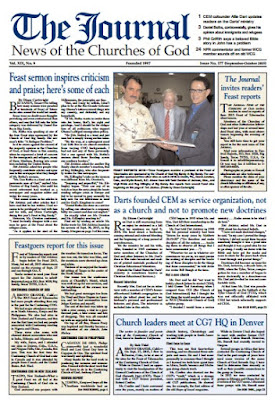 The latest edition of The Journal: News of the Churches of God is out.

Most of us would find it hard to imagine how a sermon promoting compassion for refugees would be something controversial, but apparently that's not the case down in Texas. A Feast message by Daniel Botha has provoked a reaction as "he swam against the current of the majority opinion in the Churches of God, at least those in this country [the US]". Botha asserted many wicked things that clearly irked his hearers, reminding them that the US is a country of immigrants, the "trail of tears" of Native Americans and past bias against Americans of Jewish, Polish, Japanese and Chinese ancestry. The nerve of the man!

"... we should practice what Jesus said we should be doing: We should take care of the stranger, feed the hungry, give something to drink to the thirsty, bind up the wounded and encourage the brokenhearted."

Goes without saying I'd have thought. This reaction though from Mac Overton.

"As it applies to the start of the Millennium, the principles are fine. But, and I may be selfish, I don’t plan to be at the Rio Grande welcoming Obama’s tattoo-covered thugs into my country, and definitely not my household. If Mr. Botha wants to invite them into his home, that’s his right and privilege. And it should be the obligation of all politicians who support Obama’s alleged immigration policy."

Guess he won't be voting Democrat. (Elsewhere in this issue, it's only fair to note, Mac has a nice review of the NPR interview with Glynn Washington.)

Bob Thiel has written his own press release with the grandiose title "Church leaders meet at CG7 HQ in Denver." Church leaders? Well, Bob sashayed up to former CoG7 president Robert Coulter for a handshake and photo op. Who was the other leader? Uh, guess it was Bob. Not a formal discussion or even an arranged discussion as far as one can tell. Bob just bowls up and blathers about how he's confused about what are and are not CoG7 churches in parts of Africa; as we say in this part of the world, "cheeky bugger!" Next time Bob is sighted I suggest the lads in Denver go into immediate lock-down mode.

And yes, there are Feast reports. Wouldn't you know it, Thiel's micro-me sect leads the listings. Guess he was keen to be in first and trump everyone else... what a busy little bee. New Zealand's Thiel site features prominently with a massive turnout of thirteen. Thirteen!

Somewhat surprising to see an article by Wade Fransson, a former WCG minister who has hopped more ecclesiastical fences than you'll find in a Kiwi back paddock - and was, last time I checked, involved in the Baha'i Faith. Wade encourages us to think of the kingdom of God and the covenants as fractals.

I think he missed a golden opportunity for word-play with fracking and fractious. Well, at least in a COG context fractal theology (yup, there is such a thing, just ask Mr Google) is a new thought.

The Journal notes the passing of Bob Fahey, once a prominent figure in the WCG. Sadly Bob died during the Feast this year. Also passing on in tragic circumstances, also at the Feast, was ICG elder Frank Scherich. The Journal notes that he "served as a pilot for Garner Ted Armstrong in the 1970s in California and Texas." Both men have substantial obituaries in this issue.

As always you can download the complete issue in PDF format.