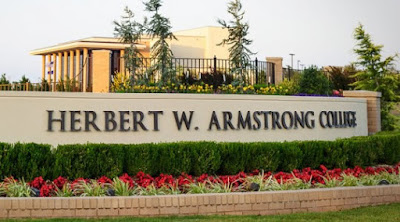 Out there in Edmond, OK, the Flurry fiefdom - a.k.a. the Philadelphia Church of God - has recently launched their very own low power FM radio station. The call letters? KPCG of course.

Just imagine being able to listen to Stephen Flurry on "Trumpet Daily" every day. And Joel Hilliker ("Trumpet Hour") twice a week.

But wait, there's more. The Key of David, for example, lots and lots of repeats of The Key of David; and PCG's answer to the Mormon Tabernacle Choir, the Philadelphia Singers.

Other than that it's loads of classical music and an in-house variety of "Christian contemporary music". I was (un)fortunate enough to catch a example from Ryan Malone called "I am every man." It was pretty awful. I noticed that these recordings all seem to feature the sect's high status family names; Turgeons, Hillikers, Malones, not the common herd. Funny that.

Behold brethren, the programming schedule. I trust you're coming over all faint at the very thought of it.

You can't listen in on 101.3 FM unless you're really close to the carefully manicured Flurry compound that includes the Armstrong Auditorium and Herbert W. Armstrong College. It is, after all, only a low power station. And it doesn't seem to have been picked up yet by any streaming radio services like Tune In. But there is a live feed at kpcg.fm. Not a very reliable feed - an unacceptable number of skips and blips, and the stream can also be temperamental in loading - but it's enough to give you a taste.