This is the second in a series on obscure Bible translations. I've restricted the candidates to those I've been able to personally acquire and examine. 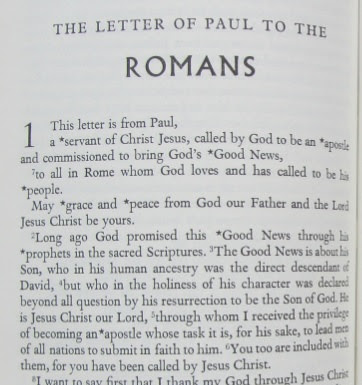 This was never intended as a 'commercial' translation, but "to be a bridge between the original texts" and modern languages, useful "for theological students who are not studying Greek, but need to get as close to the original as possible." The English translation is supported by 140 additional pages of notes and a glossary, and it's the notes that make this unique. A British initiative, the best known scholar involved in the project was probably William Barclay, who produced his own NT translation in the late 1960s as well as the popular New Daily Study Bible series.


Do not judge, that you may not be judged, for as you judge others you will yourself be judged, and the measure you use for others will be used for you also.

There is a 'translational note' for "that you may not be judged".


But the context does not tell us by whom. The verse is often understood to mean, 'do not be critical of other people or they will be critical of you', and the context seems to support this. But the NT often uses the passive where it is God's action that is implied. Most English translations retain the passive, but in languages where the passive is difficult or impossible a choice must be made...

While the most recent edition (1996) is still available from the Bible Society in the UK, there is not a lot in the way of information about or reviews for the TNT in any of its iterations. That may be because it is not widely known or used outside a fairly restricted circle, and has not had much of an impact in the American market. The language is, as you'd expect, clear, and the notes are helpful and practical for the intended purpose. At the very least this is a credible translation and largely free of sectarian agendas and bias.