It Ain't the Barmen Declaration

Gathered in New York last month, the ideologues of conservative Christianity - "Orthodox, Catholic, and Evangelical Christians" - launched something called the Manhattan Declaration (definitely not to be confused with the 2008 Manhattan Declaration on Climate Change.) It's a call to action that begins with a slop-bucket-full of historical misrepresentation.

After the barbarian tribes overran Europe, Christian monasteries preserved not only the Bible but also the literature and art of Western culture. It was Christians who combated the evil of slavery: Papal edicts in the sixteenth and seventeenth centuries decried the practice of slavery and first excommunicated anyone involved in the slave trade; evangelical Christians in England, led by John Wesley and William Wilberforce, put an end to the slave trade in that country. Christians under Wilberforce’s leadership also formed hundreds of societies for helping the poor, the imprisoned, and child laborers chained to machines.

In Europe, Christians challenged the divine claims of kings and successfully fought to establish the rule of law and balance of governmental powers, which made modern democracy possible. And in America, Christian women stood at the vanguard of the suffrage movement. The great civil rights crusades of the 1950s and 60s were led by Christians claiming the Scriptures and asserting the glory of the image of God in every human being regardless of race, religion, age or class.

This same devotion to human dignity has led Christians in the last decade to work to end the dehumanizing scourge of human trafficking and sexual slavery, bring compassionate care to AIDS sufferers in Africa, and assist in a myriad of other human rights causes—from providing clean water in developing nations to providing homes for tens of thousands of children orphaned by war, disease and gender discrimination.

This account is of course riddled with what used to be called "sins of omission." But having massaged history into something acceptable, the clarion call goes out. What great concerns must now be addressed in our times?

These people really do have one-track minds. Moral living is all about what happens below the waist. From Barmen to barmy.

And who signed this Barmen ripoff?

It's a pretty ugly mob. Little wonder that you can find the Manhattan Declaration proudly on display at the First Things website.
Posted by Gavin R at 08:01 3 comments

Bibliolatry and the Age of Orthodoxy

The Reformation was an era of fiery debate, empowered by a dynamic that saw the world in broad brush strokes. Once the fire died down, and until the Enlightenment broke through, the embers were used to justify the reign of Orthodoxy.

Those assertions are not new, but I've been reminded of them by reading Bernhard Lohse's A Short History of Christian Doctrine.

It's a remarkable work, especially given that the first German edition dates back to 1963 (which, if you're in need of a pop culture reference point, was the year The Fugitive first hit black and white television screens.)

Lohse is measured in his approach, but there's not much doubt that he is less than enchanted with the rise of Protestant Orthodoxy. The fact that it now lies gutted on the floor, a victim of the rise of historical thinking, doesn't change the fact that it affects us all still. Its outstanding but pernicious legacy may be the way most of us, as a default setting, were once taught to superstitiously regard scripture.

The Reformation thrust the Bible into a new prominence, and the big name Reformers were responsible for making it central to their agendas. Yet, as Lohse points out, the original layers of Protestant confessional writing contain no specific doctrine of scripture. That had to wait till the Formula of Concord in 1577.

It was possible, in those salad days, to be very critical of scripture - the letter of "James" for example (famously dismissed as "an epistle of straw") or the book of Revelation. The criteria for such judgment seems to have been whether or not a particular biblical document witnessed to what was seen as the essential gospel proclamation. Early German Protestant bibles happily relegated whole canonical books to a New Testament appendix, something almost unimaginable today.

In the Formula of Concord are found "the first traces of that development which sought to find in Scripture merely proofs for a comprehensive system of doctrine and which, at the same time, used Scripture as a law book..." (p.220)

Why? "This was done in order to obtain a bastion which would be safe from attack by the [Catholic] church... not even the most curious theories were disdained." (p.221)

Orthodoxy never solved the problems associated with this approach in a satisfactory way. In time the "dead hand of Orthodoxy" was first dissed by the Pietists (whose progeny yet prosper in a variety of evangelicalism) before collapsing under the impact of a modern world. But the proof texting approach that emerged then endures and prospers in the pigpens of fundamentalism.

The liberators - and of course Lohse is writing from a European perspective - emerged in the figures of Semler and Lessing, and the questions any thoughtful Christian faces today are not perhaps much different from theirs - unless you were raised in a "liberal" tradition to begin with. Semler "demonstrated the gradual development of the biblical canon, and in doing so undermined the Orthodox doctrine of the verbal inspiration of Scripture." Lessing grounded Christianity in the beliefs that predated the creation of the New Testament, the "rule of faith." Idolatrous claims about the bible and its alleged perfections have a long history of challenge.

For Lohse, these were liberating deeds. If so, it's a freedom that was enjoyed by many of the Reformers themselves, but after more than four hundred years has still to percolate through to the coal face of conservative Christianity.
Posted by Gavin R at 19:46 0 comments

1. Because it's a long way from here, and the grass always looks greener...

2. Because the frisson between the various synods is invigorating.

3. Because the cardboard stereotypes of Missouri (conservative), Wisconsin (fundamentalist) and ELCA (liberal) members are uncannily accurate.

4. Because you can both be horrified by and admire American Lutheranism at the same time.

5. Because of people like ELCA member Ursula Stemm, who, commenting on a proposal by a Missouri Synod task force to remove the word Missouri from the denominational name, "believes an LCMS name change would enhance the state’s reputation."

6. Because of the anonymous ELCA commenter on the Pretty Good Lutherans blog who, with reference to that same proposal, innocently asks: "Any talk about removing the word “Lutheran” from their name? 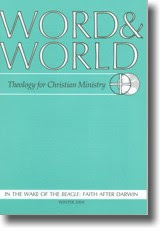 I've just noticed that Word & World now has its 2004 quarterly issues online in full. W&W is approachable theology from a committed Christian perspective, but not one weighed down with the baggage of Calvinism, what passes for evangelicalism, or crass apologetics. It's a commendable practice to make its wealth of archived articles available to all comers, including impoverished theology students, even if there's a five year time lag involved. The latest issue has me salivating for subscription status: In the Wake of the Beagle: Faith After Darwin, but alas, it's not currently in the budget. The editorial is however available, and once you recover from the title, it makes its point well.

Any undergraduate student in biblical studies would do well to check out the offerings, going back to Vol. 1 (1981), for suitable supplementary reading for course work. The 2004 themes include 1 Peter and Violence. W&W is produced by Luther Seminary (ELCA).
Posted by Gavin R at 22:04 0 comments