Kevin Ward offers some intriguing thoughts on that peculiar beast known as “evangelicalism” in the August 09 issue of Stimulus. A generation or two ago Harold Lindsell, editor of Christianity Today, bemoaned the watering down of the “e-word” in The Battle for The Bible, and proposed that the righteous of the land abandon the term in favour of the “f-word” (fundamentalist.) Ward comes at it from the other direction: the “e-word” has been hopelessly contaminated by the “f” crowd. Time to concede the rout and stage a hasty strategic retreat. From henceforth the more thoughtful members of the “e” crowd might consider hoisting the letter “o” aloft. Let us be “orthodox”!

Dr Ward makes an interesting case, with a strong historical perspective on the scene in Aotearoa/NZ. Alas, those of us who are not part of the Borg Collective – made up of Anglo-Reformed Protestants and their cognate groups – may feel sidelined by the argument. Although as a third generation Kiwi, and being familiar with the Borg mantra that “resistance is futile,” I still have too many Danish and German genetic markers to graciously cede the “e-word” to the dominant Anglo usage.

Between them Wesley and Edwards represent two faces of a new movement of revival, which has borrowed a label from the Lutheranism of the Reformation and calls itself Evangelical.

Some years ago I was vacating a school-house in a small Taranaki town, ready to move to Wellington. The new tenant-teacher and his wife stopped by to check it out. She spied The Evangelical Catechism on the bookshelf and enthused: “Oh, I do approve!” Little did she suspect (nor was I about to tell her) that the esteemed volume was the American edition of the Evangelischer Gemeindekatechismus. Neither Billy nor Franklin would, I imagine, have recognised it as expressing their belief-system. The European usage tends to value the evangelical (ie. evangel/proclamation-centred) over against what are really biblicist (bible-centred) and tradition-centred approaches.

Hence Bultmann was actually a better evangelical by far than Lindsell.

Dr Ward makes no reference to the prior use of the “e-word” before it was applied by Wesley to a pietistic form of Christianity, and ultimately mutated across in mutilated form into Reformed and Anglo usage. The rest is history. Today this kind of Anglo-centrism is often taken for granted. A text on modern Christianity breezily acknowledges the way the “e-word” was used before it was mingled with Pietism and revivalism, then dismisses the former meaning as irrelevant. Really? Is this the theologian’s way of crooning “lie back and think of England”?

Having said that, maybe the “e-word” is indeed a lost cause for thoughtful Christians who genuinely identify with the positive progressive social values that were once associated with that label in the English-speaking world. Dr Ward asks “does a rose by any other name still smell the same?” Fair question, but if you start calling rhubarbs roses, where oh where will it all end? 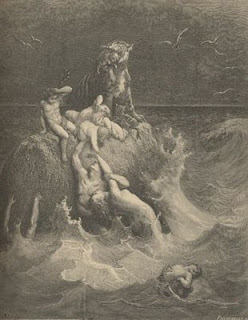 Headlines blare that Noah's Ark has been found, and on the slopes of Mount Ararat no less. But wait, there's more: the wonderfully preserved boat was found by a bunch of "evangelicals."

Here at Otagosh however we can reveal exclusively that the claim is false.

The Ark isn't Noah's. It belonged to Utnapishtim.

Yes, this is the long-awaited proof of the divine origin of The Epic of Gilgamesh. Skeptics repent! Even now we're rushing to register the First Church of Uruk with the charities commission. We anticipate all donations will be tax deductable.

Forget Yahweh, or any of the other pale imitators. It's Adad and Nergal, Shullat and Hanish, Ninurta and Enlil all you infidels should be really worried about! If I was in your shoes at the moment, I'd be particularly cautious around Ennugi and Ea as well.

It's all there to read in Book 11 of the Epic, written long before the Israelites fiddled with it.

Expect a revival of the true faith, temples springing up bursting with hymns of praise and sacred prostitutes. A sign has been delivered to a faithless generation, Gilgamesh is lord of our hearts, and moreover (and this is very important)...

(Normal service will be resumed in due course.)
Posted by Gavin R at 16:47 3 comments

- to be released on May 3 (according to Amazon, May 4 in the US). Among some of the biblioliterati there have been advance kneejerk reactions and much grinding of teeth at the sheer awfulness of an outsider writing a book like this. Perhaps they forget what a rank amateur Mark was.

In any case, Rowan Williams' review in the Guardian is a helpful corrective to pious academic puffery. The first paragraph is worth quoting in full.

On the back of the book is printed in large capital letters, "THIS IS A STORY". It's worth remembering that emphatic statement as you read the book. This is not a speculation about the beginnings of Christianity, a claim to have uncovered the real, suppressed history of Jesus. It is a fable through which Philip Pullman reflects on Jesus, on the tensions and contradictions of organised religion – and indeed on the nature of storytelling.

A year ago I read C.K. Stead's My Name Was Judas.

This is another fictional retelling of events that intersect the Gospels. Plausible it was not, but literature - thank God - transcends sober scholarly consensus. It was a stimulating read and told its own truth.

Could it be that Mark was attempting something not entirely dissimilar in his time? At the very least he was creative with his sources.

In any case, I'm eagerly awaiting a copy of Pullman's work, having taken great delight in his His Dark Materials series. A fable deserves to be judged on its own terms; just ask the archbishop.
Posted by Gavin R at 22:39 1 comments

James McGrath (Exploring Our Matrix) has posted a fascinating hour-long video interview - which I've filched and embedded below - featuring James Tabor, the topic: What kind of Jew was Jesus? Tabor is both measured and stimulating, if a little rambling, and the speculative elements - evident in The Jesus Dynasty - are reined in. Refreshing too is the fact that he is interacting with Jews rather than fundagelical Christians, which means the questions are, in many ways, much more "to the point" rather than tearing off to address the standard apologetic insecurities. Those familiar with Tabor's long forgotten AC links will be interested to note that he also comments on the stalled progress of his Original Bible Project, which draws its inspiration in part from the writings of Ernest L. Martin.

Worth the investment of time? Well, I thought so!