Honestly, one could rabbit on about the gaping holes in Erich von Fange's book for months, and not exhaust the possibilities. But neither you nor I have the patience, and Evolution Sunday is this coming weekend. Here then is a parting shot.

Fange writes: The striking fact is that natives never seem to discover a new idea for themselves, nor do they modify anything in the slightest. When change has come to a community, it came from the outside. (p.47)

What racist drivel. Fange wisely omits to define what he means by "natives," but I suspect he has people of a different skin colour to his own in mind. On page 212 he gets explicit by referring to Africans as "natives." Why not blond Swedes? The truth is that all of us can trace our origins back to tribal communities: Angles, Saxons, Goths... The statement is garbage, and inherently illogical.

And let's be upfront about that term "natives." It's insulting and demeaning in contemporary useage. Only a moron in a hurry would use it in a serious work of non-fiction.

Racism seems to be an undercurrent in Fange's worldview. He clearly doesn't like the work of groundbreaking French Jesuit scholar Teilhard de Chardin. Fair enough, that's his right. But when it comes to blaming someone for the Piltdown hoax, Fange has Teilhard collared right from the start. Why Teilhard and not one of the English suspects?

The whole business seems contrary and out of character for an Englishman. (p.157)

Yes, it has to be the greasy little Frenchman according to the von Fange logic. One can only observe that Herr Doktor von Fange can't have met a great many Brits in his travels.

At times Fange seems to have "lost it" completely. Possibly due to watching too much on Fox News, Fange constantly divides the world up into Christians (by which he means bibliolatrous fundamentalists) and humanist liberals. In fact, the only reason evolution exists is that "the evolution belief system is designed not to explain the world, but clearly to attack and erode the faith and values of Christians." (p.265)

To put the kindest construction on this statement, one could call it myopic.

[I]f in the future Christians are burned at the stake, evolutionists will light the matches. (p.265)

Rampant paranoid delusions. Is this really the best that Concordia and the Missouri Synod can up with as a popular Creationist text? 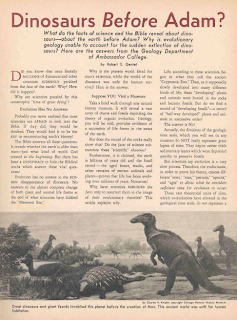 Can we hear an Amen! from Brother Gentet?
Posted by Gavin R at 08:54 7 comments

It must be a bother having to write a book about evolution when your own belief system allows only a few thousand years for the history of the universe. This probably explains why Erich von Fange spends so much time tip-toeing through some particularly vacuous material, like a rag and bone merchant on the prowl, that has seemingly little or nothing to do with his subject.

It also gives us an opportunity to check out von Fange's capacity for elementary-level research; the kind you'd expect of a competent twelve-year old. This isn't an unreasonable expectation given that Dr. von Fange's area of expertise is education (oh come now, you surely didn't expect it to be biology, paleontology or geology did you?)

Before 2000 BC almost every corner of the world had been visited by people who possessed amazing technical skills. They erected vast astronomical instruments... They are found on remote uninhabited islands as well as on the continents and major islands... On remote Tonga island a massive stone lintel atop three huge stone pillars has two incised lines that indicate winter and summer solstices. (p.275)

Now let's pause for a moment. Remote Tonga island? Despite being a qualified professor of education, Fange seems to have an extremely limited grasp of world geography. Tonga isn't an island, but the name of a group of islands. The structure Fange refers to isn't found on "Tonga island" (there's no such place) but on the island of Tongatapu, and is known as Ha'amonga 'a Maui. It is believed to have been built in the thirteenth century, probably as a gateway to the royal compound. It was only in 1967 that the then reigning monarch of Tonga, perhaps eyeing the tourist potential, began claiming that it had Stonehenge-style astronomical significance. Fange could have saved himself considerable embarrassment just by picking up a copy of the World Almanac, or doing a Wiki search.

But he obviously didn't.

Before and during the Golden Age, small bands of the curious and adventurous, the rebels and the ostracized, left or fled the Iranian Highlands for the great unknown world, much like the defeated Maori rebel or chief who fled with his followers to find another island home or perish in the sea. (p.326)

I wonder just how many islands Fange thinks make up New Zealand? I wonder whether he knows the difference between the designations Maori and Polynesian? I wonder whether he did any serious research at all? The Maori are the first people of New Zealand. There are two main islands, bearing the highly original names North and South Islands, and most of the population prior to the arrival of Europeans lived on the North Island (and in fact still do). Evidence of atoll-hopping refugees? Zero. Certainly Maori arrived from elsewhere in the Pacific, but after settlement (and becoming the people referred to as Maori today) there is little or no evidence of return journeys. The sole exception might be the colonisation of the Chatham Islands by the Moriori, but I doubt Dr. von Fange has ever heard of the Chatham Islands, let alone the Moriori.

He has heard of Rhodesia though, and seems to think there is still a country bearing that name (p.301) - which is a bit weird if he bothers to even occasionally follow the news.

But then, if you're prepared to state that "there are good reasons to suppose that at least some dinosaurs were on the ark," (p.57) without providing a scrap of evidence for these "good reasons," or even the barest of footnotes, I suppose Tongan astronomical observatories and imaginary Maori sea voyages by unhappy chiefs are small change.

You have to wonder what Concordia Publishing House is doing, promoting this stuff. Does anyone there actually edit for something other than spelling and punctuation?

I'd like to say that this kind of nonsense is the exception, but unfortunately it isn't. Next time we leave the Pacific to clamber up the mighty Andes with Dr. von Fange, and catch up on the post-WCG writings of Plain Truth journo Robert Gentet.

I came across Erich von Fange's In Search of the Genesis World a few weeks ago. What captured my attention about it was:
Well, here was a chance to get up to date on what creationists are saying. Not backwoods snake handlers mind you, and not an author whose rant is part of a revivalist altar call. Fange has a PhD. from the University of Alberta, and is a former professor at Concordia College in Ann Arbor, Michigan.

For the last several days I've been working my way through it with a highlighter and a notepad at my side. I've got to concede that it's a remarkable book, though perhaps not quite in the way that Dr. von Fange intended.

The first thing to note - in view of the many "gap theory" afficionados who might frequent this blog (and you guys know who you are!) - is that Fange is an unapologetic Young Earth Creationist (YEC). But, wouldn't you know it, the name of a "gap" journalist (an Ambassador College graduate and Plain Truth writer) comes into his account, and is cited as an authority.

So, here begins a series of posts that will together constitute a review when complete. We'll travel to Tonga, climb aboard the great Andean mountain elevator, turn popular journalists into evolutionary experts, try to find Rhodesia on a map, rub shoulders with Erich von Daniken, and speculate on the lost continent of Mu and - especially exciting for a New Zealander like myself - discover fascinating, previously unknown details about Maori culture.

All this and more, beginning with part two!
Posted by Gavin R at 20:05 5 comments