The nice people who publish Discern magazine have tackled the thorny issue of the alleged nastiness of God in the Old Testament. You know, those gut-churning passages where the divine command goes forth in the cause of bloody ethnic cleansing. Erik Jones rides in to the rescue, and lo, it's all a big misunderstanding.

The entire article is a whole three pages long, and two of them are focused on the New Testament. Surprisingly, given the publisher's predilection for cuddling up to obscure Old Testament laws, there's a certain Marcionite flavour to the discussion (not that Erik could probably tell Marcion from Marmite). The title says it all: "Jesus Christ Taught Peace and Nonviolence."

Well, okay, I'll sign up to that. But wait, what about those sticky stories in the Hebrew Bible? Not a problem! Erik lays out the solution in just four easy, pre-masticated steps.

1. God's Law is consistent. Bumping people off has never been acceptable.
2. Lack of faith. Those ancient Israelites were a feckless bunch and refused to simply trust in God.
3. Hardness of Heart. This sounds a lot like no.2 to me. Those dimwitted Israelites were allowed to kill and maim only because God took into allowance that they were spiritually unfit. Not like Erik and his mates in the One True Church of course.
4. Consequences. God took a dim view of people who followed his own policy compromises. Just look how he took away planning permission for a Davidic Temple because Dave, a man after his own heart, had carried out his orders.

So there you have it. Hangs together nicely doesn't it. And just think, all those needless books full of big words written by lesser mortals who tried to make sense of this before Erik and Discern came along.


"... there is no contradiction between the Old and New Testaments! God's consistent will was for his people to be peaceful and nonviolent."

Well, bless your heart Erik, and thank you for clearing that up. Any questions? Oops, sorry, gotta go...
Posted by Gavin R at 16:47 5 comments

No, I don't mean that literally; unless of course you're particularly short of kindling. Book burning isn't usually regarded as a civilised practice, which is probably why American fundamentalists seem to enjoy an occasional indulgence. However, if you use the NIV as your primary Bible translation, you might think about re-shelving it well away from public view. Maybe in a cardboard box alongside the more blatant sectarian versions, paraphrases and Science & Health with Key to the Scriptures.

Why? Just take a gander at this mind boggling list of NIV mistranslations.

Now I do understand the difference between literal and dynamic equivalence translations. And yes, I'm no fan at all of wooden word-for-word versions like the NASB. But granted the thorough legitimacy of dynamic equivalence translations on the grounds of approachability, let's be honest; there's a huge theological agenda - you might say sectarian bias - running like a freight train through the NIV's translation choices, as clearly documented by Paul over at Is That In The Bible? If you have a friend or relative who prefers to use the NIV, do send them the link!

Paul favours the NRSV (specifically the excellent New Oxford Annotated Bible) along with the 1966 Jerusalem Bible. Clearly a man of discernment. I'd happily add a couple of further suggestions, but will leave that to another day.

Perhaps more important is to identify the bad eggs in the Biblical egg carton. There are a few rules of thumb, one of which is to simply trot along to your local Christian book store and note down the versions which are most heavily promoted. Those are generally the ones to avoid. They sell for a reason, and it ain't meticulous scholarship or textual honesty. Oh dear, there goes the New Living Translation and the much over-hyped ESV!

Paul provides a wonderful quote from N.T. Wright at the end of his posting. No-one can accuse Wright of being anti-Evangelical, so it makes his statement even more relevant.


When the New International Version was published in 1980, I was one of those who hailed it with delight. I believed its own claim about itself, that it was determined to translate exactly what was there, and inject no extra paraphrasing or interpretative glosses…. Disillusionment set in over the next two years, as I lectured verse by verse through several of Paul’s letters, not least Galatians and Romans. Again and again, with the Greek text in front of me and the NIV beside it, I discovered that the translators had another principle, considerably higher than the stated one: to make sure that Paul should say what the broadly Protestant and evangelical tradition said he said…. [I]f a church only, or mainly, relies on the NIV it will, quite simply, never understand what Paul was talking about. [Justification: God’s Plan and Paul’s Vision, 2009, pp. 51-52] 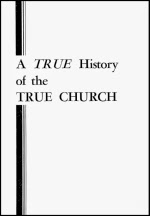 Once upon a time it was a popular apologetic ploy to track the "true church" down the pages of history. The "true church" being, quite naturally, your church. Down the ages a faithful remnant had remained, believing things just like those taught by your particular denomination. The Roman Catholics might have apostolic succession, but that was irrelevant. There might by Orthodox churches that claimed continuity with the congregations of Paul's day - but no need to sweat it. Insightful apparatchiks at church HQ somewhere in the DIY culture of middle-America would delve into popular history books and reconstruct a chain of true belief to contrast with those in the majority who had so clearly "fallen away". Ellen White did it for the Seventh-day Adventists and Herman Hoeh (pronounced 'Hay', not hooey) did it for the Worldwide Church of God in a thin booklet with the modest title "A TRUE History of the TRUE CHURCH" (emphasis in the original).

But in between those mighty treatises came Dugger and Dodd's 1936 "A History of the True Religion". These two blokes were leaders in the pre-Armstrong Church of God movement, and drawing inspiration from the indefatigable Mrs White, they produced their own imaginative account of how to trace the 'true church' through the inconvenient murkiness of Christian history. I first stumbled on a copy - lovingly photocopied from an original and specially bound - while visiting at the home of a Dunedin member of the WCG in the late 1970s. This book, I was told, made it all clear. Why, even "Saint Patrick" was a Sabbath-keeper!

Okay, so I was sceptical even then. But a few years later a redaction of the original opus (third edition), published by a Jerusalem-based Duggerite offshoot, came my way, and I've never had the heart to toss it.

It's a romp from Pella to "Dr. Arius" ("the most talented, intellectual, and spiritual power of the fourth century"), from the Vaudois and Paulicians to Peter Waldo and on and on to the Seventh Day Baptists, and you can probably guess the rest. Dugger and Dodd were also fans of the "seven church eras" of Revelation.


"The history of the early days of the church in America, from about 1620 to 1789 is covered by the latter part of the Sardis period... The Philadelphia period evidently had for its beginning about the year 1789..." 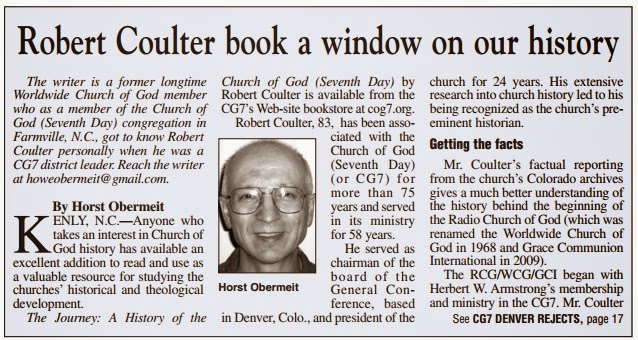 What is interesting about this is that the Church of God (Seventh Day) has just published a new history of their movement, authored by prominent minister (and past president) Robert Coulter. The latest issue of Dixon Cartwright's Journal includes a review by Horst Obermeit.

Coulter, to his great credit, debunks the entire fiction of a connection with the various individuals and groups Dugger and Dodd cherry-picked from history. It's worth downloading this Journal issue just to read the review, which contains some interesting quotes.

One can only imagine the wailing and gibbering in some of the loopier COG sects as one of their favourite sacred cows heads off to the butcher's slab. 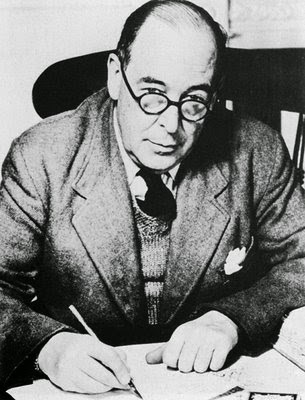