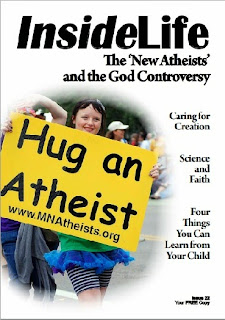 Grace Communion International's New Zealand operation has produced few notable thinkers, neither in its cultic WCG days nor now under the Tkach imperium. Dennis Gordon is the exception that proves the rule. Dennis was there in the not-so-good old days, and successfully made the transition to the new theology. He is a respected scientist who also ministers to the GCI congregation in Wellington.

In the current issue of Inside Life, published by the Kiwi GCI, Dr Gordon leads a charge on "the new atheism".

I want to be generous in my comments on the article, but it's hard not to pick up on the invective. Dennis seems to be venting, and I'm not sure he does justice to the questions raised. Fair enough, this is an apologetic piece (what else could it be in a church magazine of this kind), but even so the tone is at times somewhat strident and defensive, though Dennis Gordon also writes: "Surely grace must prevail, especially in wrestling with contrary views."

There are a lot of statements in the article that I'd want to take issue with - simply as a (hopefully) progressively minded person with some fairly deep Christian roots of his own - but for now I'll limit myself to this one.

Jesus himself reminded us that 'God is spirit', to be 'worshipped in spirit'. This is made possible by the indwelling Spirit of God, who makes God known relationally, but how can an atheist understand or accept this?

Which appears to take the issue out of the domain of rational discourse. I'm not sure how Dennis would unpack or explain the concept of God only being "known relationally". Certainly the Bible (or even just to consider the New Testament) is anything but univocal on that matter. If an atheist can't understand this, can a Hindu?

Let's be honest; there's a certain amount of bull-roaring on this blog when it comes to atheistic positions. So my challenge is for those with clear views to offer some invective-free observations and analysis of Dennis' position (both pro and con are welcome). Insults and venting won't get past the moderation process. Sarcasm settings are also on low, and it's a prerequisite to have actually read the article first! It would be fantastic to have an adult discussion that puts reason and courtesy above point scoring - at least this once.