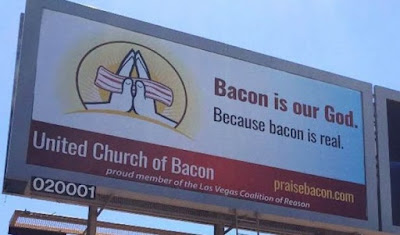 Which set me to thinking. Self deprecating humour isn't something you come across too often in rigorous Bible-based churches. Catholics can usually laugh at themselves (unless they're ultra-conservatives), but high-demand sects? Not.

In fact any kind of implied self-criticism, humorous or otherwise, is usually strictly verboten. Their ministers preen and strut, expecting every gracious word that drops from their lips to be accorded unquestioned respect. Leaders' opinions are quickly transubstantiated into authoritarian rulings in a way that would make a Roman bishop blush. That's especially true of Pentecostal and fundamentalist bodies, but is also rife in many so-called evangelical churches. Of course you can poke the borax at other Christians, but woe betide any belittling of your own brand. Being able to laugh at yourself goes hand in glove with a healthy dose of humility.

The UCG is far from the worst offender in this world of preacher/prophet narcissists. Think instead of David Pack, Gerald Flurry, Roderick Meredith and a host of low-wattage also-rans. Can these leaders handle criticism - constructive or otherwise? Or do they take themselves, their personal opinions and self-entitlements with deadly seriousness?

Where there is no capacity to stand back and smile at your own eccentricities, to be willing to sit down with the critics, engage in dialogue, and actually make changes, there is little likelihood of finding a healthy community.

Narcissistic leaders are quick to stifle dissent by casting people out. It's not a great strategy. Within the community a degree of polite respect can be maintained as people invest in a process of conversation. Once the critics are beyond the walls they have little choice but raise their voices very loudly.

So while I won't be signing up with the United Church of Bacon anytime soon, I have to admit that I've seen worse. Much worse.
Posted by Gavin R at 19:46