Thanks to Reg Killingley for drawing attention to this article in the Washington Post.

In days gone by I would have viewed "cultural Christians" with a highly jaundiced eye. Indeed the very term would have seemed an oxymoron. To take Christianity seriously meant being very serious indeed. Serious about the Bible, moral issues (always personal moral concerns rather than systemic issues in the wider society) and those all important boundary markers (such as dietary and calendar issues) that separated one out from the great unwashed.

These days I'm not so sure. Alana Massey's op piece resonates with me in many ways, enough so that I don't so much want to take up stones to throw, but offer a quiet 'amen' to some of her statements.

Marquette University professor Daniel Maguire, a theologian and former Catholic priest, makes the case in his book “Christianity Without God” for reclaiming the Bible’s epic moral narrative and leaving behind its theistic elements in order to combat neoliberal economics and environmental destruction. “When believers and nonbelievers are working together, the God thing doesn't matter a bit,” he told me. “It is just a backdrop to the issues in the real world.” Cultural Christianity has already emerged in practice, even before it’s become a self-professed identity.

But why should cultural Christians bother trying to reconcile with churches? “People very understandably associate religious institutions with very real harm and danger,” Stedman says. “But institutions are also places where people share ideas and where they organize, and heal, and hold each other accountable.”


As Maguire points out, the biblical metaphor for society is a household, not an institution but a dwelling place for a family. Though families will quarrel over what they don’t have in common, they are meant to come together for what they do: an ancient story of a new family formed in a place most of us will never go and a call to peace in the world that none of us can ever entirely live up to. And that is worth keeping alive for its radical, enduring and miraculous love.

It's not a line that will go done well with literalistic Christians, and atheists of the monochromatic variety will simply dismiss it as a weak-kneed option. Maybe so.

But then again, maybe not. Here's how Maguire sets out his intentions in his latest book. 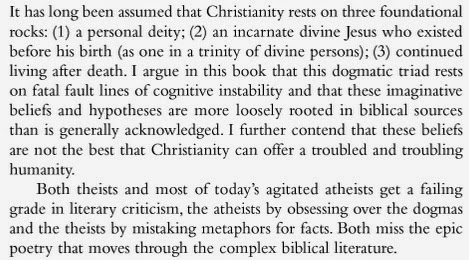