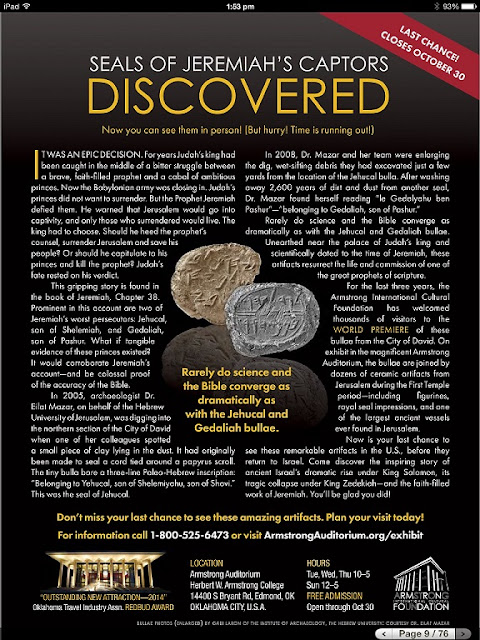 A friend who is far more observant than I am pointed out that Gerry Flurry, Grand High Poobah of the Philadelphia Church of God, has bought a full page ad in the current BAR.

Back in 2012 I mentioned Flurry's effort to curry favour with the archaeological community in Israel, and in particular Eilat Mazar. The specific issue centred around the "seals of Jeremiah's captors" (see Excuse me Ms Mazar, are you nuts?) and coverage in the selfsame BAR. Here's an excerpt from that post:

Does Ms. Mazar, or the BAR, know anything about Armstrong Auditorium or Herbert W. Armstrong College?  Do they know about the separated families, their policy on medical intervention, that the college is unaccredited?

Do they know that both are controlled by the Philadelphia Church of God, led by Gerald Flurry, who claims to be "That Prophet" (John 1:21 KJV).  A man who writes: "God's ministers must... lead God's people to magnify my office -- which is really God's office." (Royal Vision, July-Aug. 2000, p. 30).

Does Ms. Mazar know that Flurry, a British- Israelite, teaches that Anglos are the "true Israelites", not Jews.

Does she, or the BAR, know or care how Flurry's ministers operate?  Even down to telling their tithe-paying members how to make an approved cup of coffee?

Now the seals have come back to haunt us yet again as Gerry continues to do what we all knew he would, attempt to gain maximum credibility by association with his mates in Israel. If you throw money at a convenient cause you hope to get something back in return, and indeed that's what has happened. In a propaganda coup (see exhibit A, the YouTube video) for what is widely regarded as one of the more unpleasant schisms of Armstrongism, the seals have been on exhibit at the Flurry cult HQ in Edmond, Oklahoma - apparently since 2012 (though somehow I doubt tens of thousands of folk have been on a pilgrimage to Edmond just to view the them.)

The current ad is a "last call" to see the exhibit before it presumably wings its way back to Israel.

Apparently the Israeli authorities haven't "wised-up" yet to the nature of their good friend Gerry and his chequebook strategy for being taken seriously. Or perhaps they just don't want to know.

Unfortunately for Ms Mazar it's a two-edged sword: as the old saying goes, "if you sleep with dogs, you'll wake up with fleas." Ms Mazar's academic credibility is not helped by cuddling up with the PCG in return for favours sought.
Posted by Gavin R at 14:33