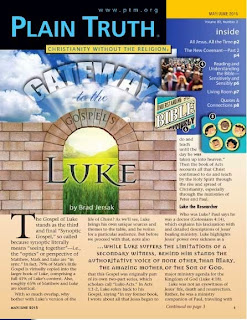 Once upon a time there was a magazine called The Plain Truth.

It was a substantial free monthly publication with state of the art layout, design, photography. The content was rubbish, but it still had a massive international circulation (paid for by the tithe-paying members of the church behind it).

Today it's largely forgotten. Deservedly so. From the 32 page glossy some of us fondly (or not so fondly) remember it now looks more like an advertising mailer for a department store. Only eight pages, issued bi-monthly. 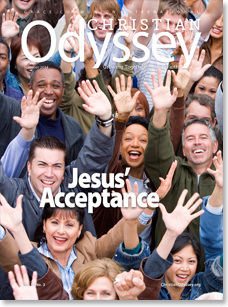 And Greg Albrecht, current publisher, owner, editor... or whatever, wants you to pay for it.

Even those high impact covers have gone.

The one thing that has remained constant is the quality of the content: it's still rubbish. Admittedly not exactly the same sort of rubbish. Fringe fundamentalism has been replaced with fringe evangelicalism.

Oh dear, how sad, never mind! The world is probably better off without either.

How are the mighty fallen. Ironic too that the much maligned Bible Advocate is still going strong. Also fringe fundamentalism I suppose, but of a more benign variety - and with a staying power that has left the PT in the dust.
Posted by Gavin R at 21:53