Genesis: Saga of the Groundlings

So begins the book called Genesis in the 1992 translation by Mary Phil Korsak. Here's her rendition of 2:7. 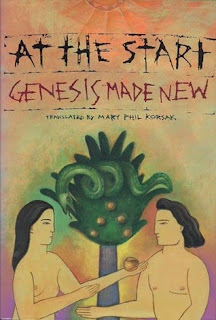 In a world filled with bad English translations of the Bible, Korsak's Genesis (At the Start: Genesis Made New, published by Doubleday) stands apart. I confess that I'd never heard of it till very recently, stumbling across a copy in a second-hand book store in Hamilton. The translator describes herself as "a feminist scholar who has spent many years with the Hebrew text of Genesis in an attempt to produce a faithful word-for-word rendering in English."

My initial impressions are positive. Translating adam as 'groundling', for example, seems (if you'll forgive the term) inspired. I also liked some of the comments by A. D. Moody (York University) in the foreward:

In English [Genesis]... has become little more than a label and a handle: a means of referring to the book, not a way into it. It can be used as unthinkingly as the collective title, The Bible. When did it become simply The Book, as if there could be no other book in question, no other history? How did Genesis come to be read as a record of the origin of the human race, rather than of the Jewish nation? ... The English tradition of translation, which is of course also a tradition of Christian interpretation, has appropriated this book of YHWH's people and made it all too familiar, while effacing much of its distinctive character.

Genesis is the product of another age, one very foreign to modern readers. Moody reminds us that "there are no abstractions" in the Hebrew and that "this is a text rooted in oral performance". Translations that try to simplify the text, or present it as propositions rather than poetry, do little justice to it. Conveying those differences in modern English is obviously no easy task. Korsak's Genesis seems to be a step in the right direction.