The Ever Present Joe Jr 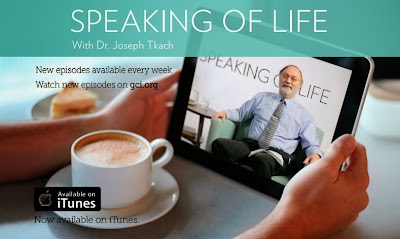 Is GCI (Grace Communion International) a mature evangelical denomination or a sect? You can only follow the indicators. One such indicator is the prevalence of a sect leader's image and by-line in denominational publications and publicity.

Here's a round-up. Let's start with the British magazine Because (March). Joe Tkach's visage and by-line are spread across the back page where one of his "Speaking of Life" messages is plastered. Things are apparently tough for the survivors of the WCG in the UK as this publication - just eight pages long - is only issued annually.

Across to Australia where GCI produces something called GCI Today on a quarterly basis. The back page promotes "Speaking of Life" with a Buddha-in-an-armchair portrait of Joe. The staff box ("The Team") leads off with everyone's favourite Pastor General. Who'd have thought that Joe condescended to run Team Australia!

In New Zealand Inside Life features one of Joe's "Speaking of Life" transcripts. One small mercy, there's no photo.

GCI in Canada is the exception. There is no mention of Joe at all in its latest Northern Light Digest. Mind you, it's only four (4) pages long. What a big effort it must be to produce this four times a year.

Then of course there's Christian Odyssey in the States. Tammy Tkach has a regular column - who knows why - and there's the "Buddha Joe" ad on the back page (you'll be pleased to know that "Speaking of Life" is now available on iTunes.) The current issue dates back to Summer 2014.

So what do we learn? Speaking of Life - a cheaply produced podcast - is now the chief media vehicle of GCI and Joe, hardly its most accomplished presenter, is the front man. The once slick publications ministry is dying on the vine.

Could these two factors be somehow related?

So what role does Joe play in GCI? Administrator? Theologian? Evangelist? The answer seems to be 'yes' to all three. It would take a hugely talented individual to fulfil all of these functions competently. So which of these roles does he actually perform well? Umm. To whom is he accountable? Umm.

Denomination or sect? The evidence seems pretty clear.
Posted by Gavin R at 22:31