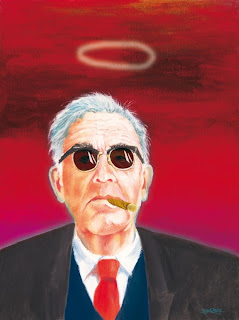 At the risk of oversimplifying, Karl Barth and his disciples maintained that humankind is basically bad to the bone. Admittedly Barth was writing at a dark time in history, but his pessimistic assessment of humanity has hardly improved matters, then or now.

Neo-orthodoxy holds than [humanity] is self-centered and therefore tyrannical, bent on destroying others, even at the risk of self-destruction. [Humanity] is evil.
Mayer, The Religious Bodies of America, 1961.

This cold, Calvinist creed is convivial to those who view the human enterprise with a jaundiced eye, but how would you demonstrate that it is horribly flawed? Isn't it just a matter of perspective or opinion? The Barthians would say no, it's a matter of 'revelation.' Which is a convenient ruse, for it puts the whole question safely outside the realm of rational debate.

And naturally, 'revelation' - "supranatural truth" - takes on a distinctly Reformed flavour for Reformed writers. If the logic isn't circular, then it's certainly curved in on itself.

Enter Paul Bloom, a developmental psychologist who has been studying how small children judge right and wrong. His article, That warm fuzzy feeling, appeared in the October 15 edition of New Scientist.

When babies hear crying, they cry, and if they see someone suffer, even silently, they become distressed. As soon as they can move, babies will try to help. They'll stroke the person, or hand over a toy or bottle.
Bloom investigated further using a set of short plays with puppets.

In one, a character would struggle to get up a hill. One puppet would help him; another would push him down. We then presented each baby with the two puppets. Even those as young as 6 months old tended to reach for the "good guy", suggesting that this is who they prefer. We also created plays in which one puppet does neither good nor bad, and we found that babies reach for a good guy over a neutral guy, but would rather reach for a neutral than a bad guy.
The kindness of babies suggests that we as a species are not bad to the bone after all, whatever Augustine, Calvin or Barth might have thought. Most of us knew that anyway. Evil does exist, people can behave selfishly and maliciously, humans are indeed corruptable, but this is hardly our essential nature.
Posted by Gavin R at 23:47