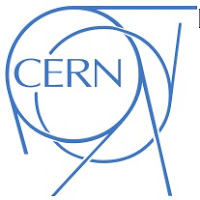 Dr. Bob Thiel, who holds a ThD from a mail-order degree mill in India, and has self-published a book on 2012 in prophecy, has made a startling observation: "the logo of CERN is basically composed of what some consider to be 3 sixes."

Further, according to Dr. Bob, "there is potential that something developed from the CERN Large Hadron Collider could help the coming European Beast power fulfill biblical prophecies such as Revelation 13:3-4."

In the Thiel belief system, there's a "United States of Europe" in the offing which will take the English-speaking nations into captivity. What's that you say? Great Britain is part of Europe? Well, Bob has never been one to let the facts get in the way of a choice bit of eisegesis.

"The European empire is rising up. And it has many indications of being the final Beast power of Revelation. The CERN logo of itself is not significant, yet it is one more item to consider, as I still believe that CERN and/or its Large Hadron Collider are likely to develop a unique military capability for the Europeans."