Houlden on the Bible

Following on from the previous post, Leslie Houlden presents a vastly different take on the unity of the Bible to Alvin Plantinga in The Strange Story of the Gospels (SPCK, 2002) where he makes a number of important points. 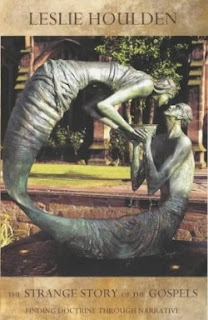 Since the second century it has been usual to see the four gospels as "broadly of a single mind." Houlden notes that this position still has its powerful advocates - among whom we can doubtless number Plantinga (who would want us to see all scripture, gospels, letters, prophets and Torah, as of a single mind.)

Houlden contends that, in fact, the Gospels themselves "are the result of profound disagreements."


"[T]he last persons that we know of to have understood Mark's intended message were Matthew and Luke, who wrote to counter and supplant him. They wrote to this end chiefly because they disagreed with his theology." (p.111)

Harmonising visions, like Plantinga's, are not dissimilar to "the well-known phenomenon, the so-called Whig interpretation of history: that is to say, the past viewed simply as leading up to the present desirable state of affairs." (p.106)

Using the Bible in this way "meant devout quarrying in the text." Proof texting.

Adopting the 'single mind' approach may be comfortably unchallenging, but there is a cost.


"The weakness of this eirenic proposal is that it may be necessary for us to make choices. Some of the issues on which the evangelists differ... are still with us today." (p.108)

Houlden uses a musical metaphor to explore the diversity and contradictory elements in scripture, suggesting that we "welcome the necessary fact that the variations proliferate, while the theme itself eludes us, almost heard but never trapped." (p.119)

It's not a suggestion likely to appeal to fundamentalists or desperately deluded apologists any more than to Whigs. Subtlety and nuance may have limited attraction to the self-appointed defenders of the faith, but that won't make the facts go away.
Posted by Gavin R at 21:19