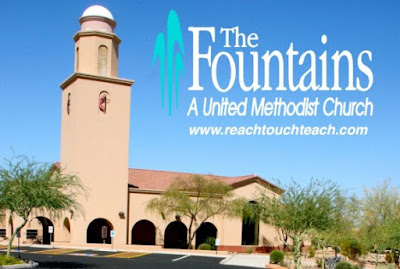 In Fountain Hills, Arizona those extremely dangerous United Methodists are under attack. Not from atheists or the godless, but from other churches in their community.


David Felten, co-creator of Living the Questions, is also pastor of The Fountains in Fountain Hills, Arizona.  He found himself under attack by fellow clergy who do not approve of his brand of Christianity.  These clergy have used the op ed page of the local paper, newspaper advertisements, and expensive banners to campaign against David and progressive Christianity.

John Shuck, himself a progressive Presbyterian pastor, interviews Felten on Religion for Life. You can also read about events in Fountain Hills on John Shore's blog.

Among the critics ("the gang of eight") who have put up banners and turned up the heat on the Methodists, are local Presbyterians, Baptists, Calvary Chapel and Lutherans. The Baptist pastor has referred to his Methodist neighbours so often as "the apostate church" that Felten, demonstrating a sense of humour the other churches must find hugely puzzling, bought the domain name apostate.church which now redirects to their website.