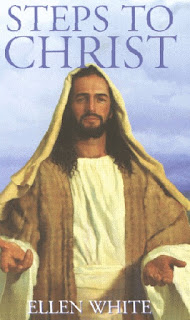 Local Seventh-day Adventists hit letterboxes in my street this week with a free copy of their nineteenth century prophetess' most distributed book, Steps to Christ.

I have a hard job understanding how the SDAs keep growing with this kind of material. Even the "culturally sensitive cover art that is free of stereotypes and beautifully presented" (as trumpeted on the blurb) is - at least for me - a huge turn-off. But you can judge that for yourself. Free of stereotypes? Uh...

I remember reading Steps to Christ as a teenager, though I preferred The Great Controversy (also by Mrs White) which was a less sickly read. This Pacific Press give-away edition comes in two flavours, Caucasian and African-American. The difference obviously isn't in the text (woe betide anyone even thinking about fiddling with Ellen G. White's sacred words!) but about that all important cover. A Google image search helped locate the alternate artwork (see below). 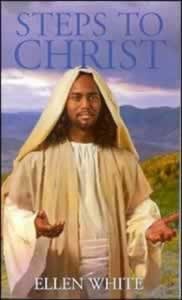 Adventists have a lot of clout, with an impact way beyond their numbers. They are well connected with New Zealand's ruling conservative National Party (former party president John Slater for example and his blogger son Cameron) and in addition to garnering tithes, they have a license to print money through their tax-free health food company, Sanitarium, producers of such Kiwi favourites as Marmite and Weet Bix. You'd think that, given such advantages, they could at least put out something more relevant and original - not to mention less kitschy - than this.

It's not that the SDAs don't do some good. Their aid agency ADRA, as far as I know, does do some good work. And at least they don't door knock on the scale of Jehovah's Witnesses and Mormons. But what advantage is it to have a plagiarist prophetess, make ridiculous prophetic claims based on a deeply flawed reading of Daniel and Revelation, and stubbornly cling to Young Earth Creationism? Growth probably has little to do with this kind of wooden evangelism - something a sociologist could address with greater insight than a theologian.

So no, I won't be re-reading Steps to Christ. If any convincing was needed it appeared as soon as I saw the slogan plastered across the back cover: "Jesus wants to be your best friend". But I might keep it on the desk for a few days anyway to, as a friend of mine has a habit of saying, keep my disgust fresh.