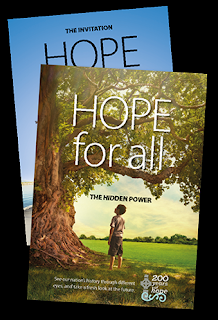 Last time I introduced the booklet Hope For All: The Hidden Power, published by "a diverse group of Christian Churches throughout New Zealand". Let's take a deeper look.


The occasion for the publication is 200 years of Christianity in Aotearoa. The first Anglican sermon was delivered in 1814 to Maori in the Bay of Islands by Samuel Marsden. The booklet understandably emphasises these historical and bi-cultural themes in its design, but behind the thin politically correct veneer is good, old fashioned fundamentalism.

"The Bible teaches that God supervised the contributors in what they wrote." (p.7)

"Did you know that both the Old and New Testaments (of the Bible) are among the most reliable ancient documents on our planet? This book is more accurately preserved than Shakespeare's plays - which are only 300 years old!" (p.17)

"Many people in the 20th century tried to disprove the Bible's historical claims through archaeology, but the evidence ended up supporting the Bible's accounts of history." (p.19)

"What archaeology has shown is that this is a book of history - not mythology." (p.19)

Getting the idea yet? But wait, there's more!

"Even a cautious evaluation has the Bible containing 737 verifiable predicted matters. The Old Testament predicts over 60 specific things that a special God-sent man would do, all of which Jesus fulfilled.

"Professor Peter Stoner did some calculations on this in his book, Science Speaks. Having selected just eight specific prophecies, the chance that any man might have lived down to the present time and fulfilled all eight of them was... 1 in 100,000,000,000,000,000." (p.21)

This is worthy of a Seventh-day Adventist tract. But Anglicans? Presbyterians? Main-line Christians?

There are huge problems with each of the quoted sections. The Bible is not "the same as when it was written." Archaeology has not shown that "this is a book of history". Where have the anonymous writers of this drivel been? Have any of them actually studied the Bible in any kind of rigorous way?*

And if you're intrigued by the clap-trap statistics delivered by "Professor Peter Stoner" (professor of what and where they don't explain), you'll find - if you bother to delve down into the footnotes - that this information was simply culled from New Evidence that Demands a Verdict by fundamentalist apologist Josh McDowell.

This would be pretty bad even if it was published by The Watchtower or Pacific Press. Dim-witted apologetics are not uncommon from the fringes of the Faith. But this was marketed as something else; a voice from the centre.

Given time I'll go through each quote in turn (in subsequent posts) and spell out some of the problems. But I'm guessing that most people who bother to follow Otagosh won't really need to be led through the issues; they'll be quite self evident.

*Apparently not. From what I can gather the work was outsourced to something called Shining Light Trust led by David Mann and Tony Collis, neither of whom (judging from their website) seems to have - apart from enthusiasm - much in the way of insight into the complexities of the subject.
Posted by Gavin R at 21:52