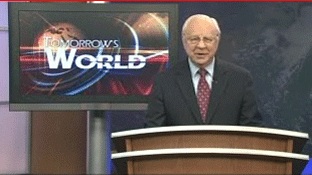 Channel surfing this morning I landed on Prime's paid religious programming, and lo, there was Richard Ames of the Living Church of God prattling on about "strategies to overcome stress." I made the error of taking my finger off the button for a moment to wallow in the deja vu.

It'll come as no surprise to readers who know about the LCG and its Tomorrow's World broadcast to hear that Tricky Dick had isolated exactly seven surefire strategies, seven being a biblical number and all.  No surprise either that he puttered through a few choice proof texts per strategy, to demonstrate just how relevant the Good Book is on personal health issues.

It was all pretty much par for the course - the usual recycled scripts that LCG and cognate groups have been using for decades.  To be honest, I was paying more attention to the tacky graphics than the "same old, same old" as Ames launched into strategy two (exercise regularly!) when the appropriate proof text flashed up on the screen.  He had just been mentioning the value of regular walking for older folk.  Now that's a fine bit of advice, but hardly something you could 'prove' from scripture. right? 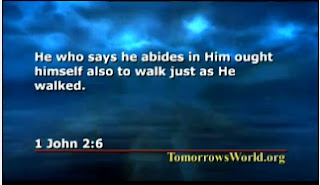 Wrong.  The NKJV verse (1 John 2:6) flashed up and off before I quite realised what was happening.

Well, land sakes...  A quick check of the program on their website reveals that Ames did use the word metaphor just before, but even so this is sailing perilously close to the exegetical wind, even for the LCG.

But, how many viewers would care?  Immediately following on from Tomorrow's World was a homegrown muggerchurch megachurch ministry that made the unanimated Ames look like a fossil.  First and foremost these guys are salesmen, each with their own distinctive, well-practised patter. Sunday morning's comedy may come in multiple genres, but regardless, accuracy or integrity seem to be the last thing on anyone's mind.