From church to shrine 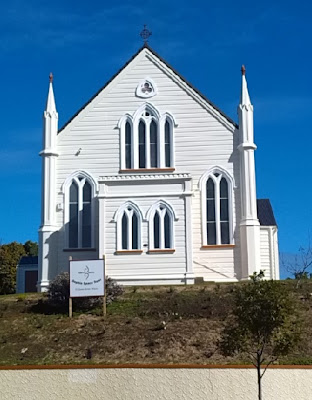 On Sunday I took a drive out to Waiuku.

Now I suspect not too many readers know about Waiuku, and to be frank, there's no reason you should. It's a small town on the edge of Auckland, famous for not a lot, other than being a fairly pleasant small town, and boasting New Zealand's oldest pub, established in 1853, The Kentish.

I parked the car and took a stroll down the main street, as one does, to see the sights. In Waiuku this takes all of ten minutes at a slow clip.

Which is when I saw this.

Clearly this is a church building with a history. I forget which denomination it used to represent... something fairly staid like Anglican or Presbyterian I think.

But even in sleepy Waiuku the winds of change are blowing. The board outside the former church declares this stately old wooden house of worship to now be a Shinto shrine.

I read it twice, three times. A Shinto shrine. In Waiuku?

New Zealand is a rapidly secularising society, and the traditional Protestant churches are in terminal decline. But who'd have expected that this prominent edifice, set prominently on a hill in the main street, would be transferred to an alternative world faith.

Please don't misunderstand. I don't have anything against Shinto shrines. Or mosques, Sikh temples or whatever. All communities have a right to establish centres for fellowship, affirmation and worship. Brilliant!

But what does this say about the state of those predominantly Anglo religious bodies, the Anglican church and its various derivatives, which once dominated in the English-speaking world. It seems they're greying out of existence.

So down the gurgler of irrelevance they go, rapidly; disappearing without any great trauma before our very eyes.

And I'm reminded of the adage, variously attributed; "better a live heresy than a dead orthodoxy."

Now if they turn The Kentish into a sushi bar... then there'd be cause to get really upset.
Posted by Gavin R at 19:25