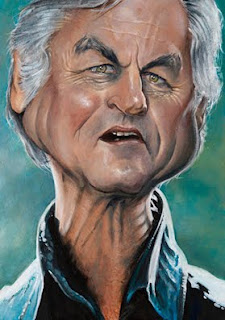 It's getting wearisome listening to theologians whining about how Richard Dawkins doesn't engage with them in his critique of religion. Again and again they accuse Dawkins of being ignorant of the mega-minds of Christian belief, and taking cheap shots at fundamentalism.

John Haught, who is an otherwise fine writer and a thinker I deeply respect, even suggests that Dawkins should engage with Karl Barth. I'm not sure what he was smoking when he made that suggestion, as Haught is a Catholic with about as much in common with Reformed theology as Barack Obama has with the NRA. But let's take the suggestion seriously for a moment.

Dawkins addresses a general audience of educated folk. He is not talking to theologians. Theologians, on the other hand, talk to themselves. Rarely does one come down from the mountain to talk to the mixed multitude in the pews, let alone society at large. Ask ten worshipers at random on an average Sunday morning to explain Barth's theology... (no, "eat my shorts" is not an acceptable response.)

So why, if theological literacy is so woefully absent from the churches, would anyone expect Dawkins to waste his energy debating the intricate fantasies that obsess a tiny minority? Dawkins is certainly confronting the fundamentalist demons, but it is precisely that segment of Christendom that makes the noise.

Does that mean that those of us outside the walls of fundagelicalism can breathe easy? Consider this quote from The Greatest Show on Earth (his latest book):

"To return to the enlightened... theologians, it would be nice if they'd put a bit more effort into combating the anti-scientific nonsense that they deplore. All too many preachers, while agreeing that evolution is true and Adam and Eve never existed, will then blithely go into the pulpit and make some moral or theological point about Adam and Eve in their sermons without once mentioning that, of course, Adam and Eve never actually existed! If challenged, they will protest that they intended a purely 'symbolic' meaning, perhaps something to do with 'original sin', or the virtues of innocence. They may add witheringly that, obviously, nobody would be so foolish as to take their words literally. But do their congregations know that?" (p.7-8)

The man has a point. And it's not only the pew potatoes who are treated this way. Dawkins could be describing a thousand theology courses at institutions of higher learning. Confronted with this reality, who in hades would want to shadow-box with Barth (or Tillich, or Bultmann for that matter.)

Theology has to "do a Dawkins" itself if it is to have any counter-punch. It has to talk in plain English (or German, French, Swahili) to non-specialists, not sit in a corner and mumble to itself. It has to (and here's the challenge) make reasonable sense. The only people who seem to try that trick with any panache are the apologists, and a sadder lot of misfits would be hard to find anywhere.

The ludicrous nature of the problem came home to me at Xmas a couple of years back when a colleague, an intelligent, motivated young woman, gave me a gift-wrapped copy of The God Delusion as holiday reading (I wasn't about to tell her that I already had a copy, had read it, and actually agreed with a lot of what was in it.) She, knowing that I was doing a theology degree, simply assumed I wouldn't have encountered anything like that before. It is people like her that mark a seismic shift in society, and bleating about how Dawkins (or Hitchins) won't be sidetracked into arcane debates makes about as much sense as the proverbial ostrich with its head in the sand.
Posted by Gavin R at 21:25