A nice quote from Cynthia Bolbach, the newly elected moderator of the US Presbyterian church:

I have to admit, up front, that on a personal basis I’d probably rather share a beer with Martin Luther than with John Calvin. 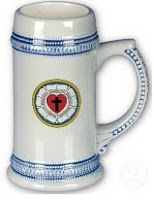 Tip o' the hat to John Shuck for that gem, and a good excuse to recall that the reformer was first and foremost a homebrew man, a task he shared with Katie, though he apparently was also partial to Einbeck beer, "said to be the most famous beer of the Middle Ages, available everywhere in Germany and shipped as far as Jerusalem. It began with two thirds barley malt, one third wheat malt. Kiln-dried malt was not used as the beer was to be "yellow in color and clear."' It had a "thin, acidic quality... probably a product of bacterial infection at the start and the multiple yeast strains, plus wild yeast from the air, all working together to ferment every last bit of sugar."

Thanks, but I'll settle for a Steinlager... But, setting the brew aside, consider the hardware.

"He ... had a great mug with three rings on it, one 'the Ten Commandments', the next 'the Creed' and third 'the Lord's Prayer'. He boasted that he could encompass all three with ease." (source)

I'm told on good authority that Jim West has one just like it!
Posted by Gavin R at 17:47