Paul - an "F" for communication

Paul is generally agreed to be a great theologian. Deep. Which may or may not be the case. But consider, hardly had the apostle to the gentiles shuffled off the stage, than everybody seemed to agree that his letters were downright confusing. Whoever wrote 2 Peter 3:15-16 (it wasn't Peter) certainly didn't think much of Paul's communication skills. Then, for three hundred years, all that deep theological stuff was either forgotten or ignored. If you asked a second century Christian about justification by faith, they'd likely just stare at you blankly. The only guy who allegedly came close was Marcion, and he's regarded as a heretic!

Two thousand years later Paul's letters have been pored over, each word and phrase studied, scrutinized and exegeted, to an extent unprecedented in ancient literature. The rule of thumb seems to be, if you think you've understood Paul, you haven't. But don't take my word for it, here's what Nicholas King, a British Jesuit scholar, wrote in the introduction to his 2004 translation of Romans: It is, he says, “very hard going, and the translator faces a formidibly difficult task. A single phrase in Romans 5:12, for example, may have as many as eleven different meanings, and the jury is still out on which of them best suits the context.... At times, I have to say, I have despaired of making Romans intelligible to a modern reader.”

The crazy thing is that it's non-Christian scholars, including Jewish New Testament experts (now there's poetic justice!), who seem to have the best handle on the prickly apostle. Paul, it turns out, has been misread from Augustine onward. Was Paul anti-Torah? Did he eat the first-century equivalent of ham on rye? Probably not.

The point for the moment is this. If Paul was such a genius, how is it that he wasn't able to pass on his insights in any coherent form? What on earth did those Roman Christians - many of whom would have been illiterate - make of his letter to them when it was first read aloud? How much of it did they understand? How much do we really understand, even after reading it again and again? 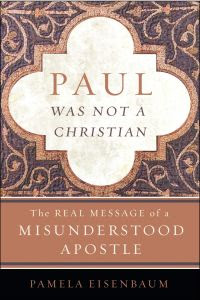 If you haven't guessed it already, I've been tasked with writing a two-thousand word essay on Paul's theology. No sweat, the footnotes alone could easily come to two thousand words. Earlier I mentioned John Gager's book Reinventing Paul, then the stimulating work of Mark Nanos. Pamela Eisenbaum has recently released a new book provocatively entitled Paul Was Not a Christian. It sounded promising enough that I sent off an order for it earlier today. Even then it would be sheer arrogance to think that any of us has heard the definitive word on either Paul or his gospel.

You have to wonder whether the apostle is sitting up there somewhere, laughing.
Posted by Gavin R at 19:26