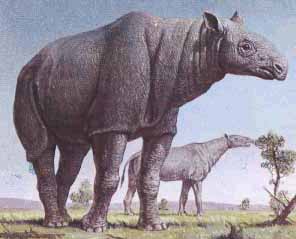 There's nothing like a good science story, and that notable science journal, The Philadelphia Trumpet, seems to have a scoop in its latest issue.

Esteemed science writer Robert Morley has uncovered the identity of the Job 40 behemoth!

Forget whatever you might have heard about such candidates as dinosaurs, crocs, elephants and modern rhinos; the behemoth was a baluchitherium.

Masterful logic leads to this conclusion, and only Mr Morley's article could do full justice to the case he makes.  I know I feel much edified by this information, having been long tormented by the mystery.

According to Robert Morley, baluchitherium was wandering around the post-Edenic world, and was thus contemporary with humankind.  Job 40:19 however "implies that it was too big for people living in Job's day to kill."

Wielding scientific methodology with razor-sharp acumen, Morley asks the question that dominates the minds of seasoned paleontologists everywhere - "But why would God have created such an impressive animal?"  You know, of course, that he will provide his own erudite response...


If you were alone next to an angry African elephant, surely you would feel quite small and helpless.  How much punier and more terrified would you feel, though,  if a behemoth were charging you?  Would you not be inclined to seek God for protection?  Would you not hurriedly repent of any wrongs?

The profundity is breathtaking!  Yes, of course.  Rather than running like the clappers, any normal person would certainly fall on their knees in front of the charging behemoth and beseech the Eternal for forgiveness and divine intervention (hopefully the list of repentable items wouldn't be too long given the circumstances!)

My only question would be exactly how Adam, Job and other Old Testament worthies could have encountered this beast given that, while it certainly lived on our side of the Cretaceous extinction (something that our meticulous prehistory scholar takes pains to point out) the last baluchitherium is still supposed to have passed over into extinction more than twenty million years ago.

But that's small potatoes given the huge credibility of The Philadelphia Trumpet (and clearly this article was thoroughly peer reviewed prior to publication), so we can only but wait for lesser journals, such as Scientific American and New Scientist, to catch up with Mr Morley's cutting-edge analysis.