Weighting on the Lord 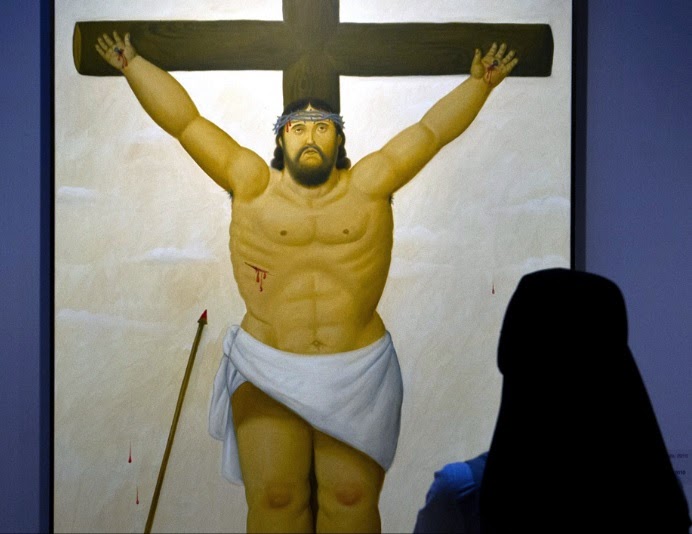 What is it about this painting by Colombian artist Fernando Botero (title: Crucifixion with Soldier) that jars so? There have been a zillion icky icons and portrayals of Jesus on the cross, most of which are meant to convey a devotional response. But this?

You can picture the man from Galilee as Nordic, Black, Asian or Māori and nobody much cares. Occasionally someone gets really radical and gives him Jewish features! Today's iterations of Jesus are above all inclusive, and we can all feel warm, cuddly and affirmed. Yet in our overweight age, when do you ever see a podgy Prince of Peace? He is said to have been tempted in all the ways we are but, let's face it, there were no super-size burger, fries and cola deals back then to lure him and the lads into Nazareth's Carl's Jr. Inclusiveness only goes so far.

An article in the May issue of White Paper (from whence cometh the photograph) asks about the relationship between body image and Christianity. It's something most of us have probably never thought about. Maybe we should.

Botero is probably aiming a dig at the Catholic art of his native land, but he undoubtedly raises eyebrows equally on folks of other Christian backgrounds. So what do you think?
Posted by Gavin R at 10:46