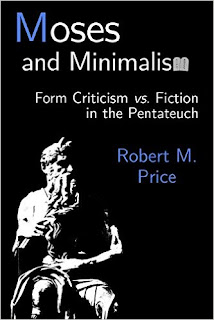 I'm a long-time fan of Robert M. Price, a.k.a. the Bible Geek. The Bible is such a serious subject, and those who sagely commentate on it are overwhelmingly an earnest, myopic (and often boring) bunch who take themselves far too seriously. You can't accuse Bob of that. Moreover he has the necessary scholarly cred with two relevant doctorates.

Which isn't to say that I read Bob uncritically. But even when I disagree with what he writes, I invariably enjoy the way he writes. His love of word play and witticisms - clever allusions that are within reach of those of us still connected with popular culture rather than the rarefied intellectual ghetto of some of the more effete academics in the field.

So when Bob launches a book called Moses and Minimalism I'm interested. What follows are a few first impressions based on the introductory chapters and the publicity material. Alas (and I reserve the right to do an about face on this as I dig in deeper) I'm mildly disappointed.

The best endorsement - three words long - comes from Margaret Barker: "I love it!" Philip Davies provides a lengthy but lukewarm response ("I find most of it interesting and quite a bit of it plausible") while Thomas L. Thompson is near-scathing.

Part of this may be due to Bob's relaxed, back-porch style. How many other books on Moses make reference to Hogan's Heroes and The Beverly Hillbillies?

And exactly why Bob goes out of his way to glowingly endorse the work of Acharya S (D. M. Murdock) is totally beyond me.

While I love Bob's ability to bring clever humour to a usually humourless subject, it may be that he has overextended himself this time. At first glance Moses and Minimalism lacks the necessary rigour to be taken seriously. Yes, there are some great Mark Twain-ish one-liners. Yes, there's a solid core of scholarship underlying the book. But for a short book (150 pages) there's a lot of meandering, if the first chapters are any indication.

This isn't, obviously, a volume written for scholars. The intended demographic is intelligent laypeople who have been fascinated by the Good Book, but have since tossed away their rose-tinted glasses and now demand a bit of piety-free honesty. Asking Thomas Thompson, author of famously dense and impenetrable tomes (I've struggled through two of them!) to appreciate let alone review a whimsical and popular treatment of this kind was, to say the least, a dubious move.

But I'm going to persevere. Provided you are willing to get into the spirit of the thing, this promises to be a great read. But I'm not sure it will win too many fans beyond the existing base.