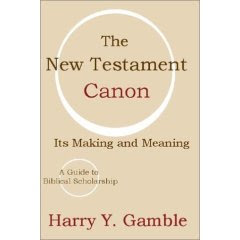 The author, Harry Gamble (University of Virginia), is one of the leading names in the field, and he is mercifully readable for the non-specialist. In less than 100 pages the reader is treated to a thorough survey sure to raise the eyebrows of anyone who has blissfully ignored the implications of questions like those above. Definitely something to add a little curry to any evangelical's diet!
Posted by Gavin R at 12:14