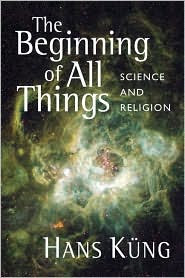 Hans Kung is a brilliant scholar and among the most perceptive voices in Christendom. Reading his Christianity: Essence, History & Future (2004) is to subject oneself to a well-deserved slapping about the chops for intellectual laziness and historical ignorance from a writer whose rigor rises far above those charges. Mea culpa! Non-Catholics in particular should probably read Kung to get a flavor of the best-case-scenario for the church-to-come, both post-Ratzinger and post-Calvinist. Kung is a prophet ahead of his time.

Having said that, The Beginning of All Things: Science and Religion

is a disappointment. Kung is outside his field, and doggy-paddling beyond his depth, a keen amateur out for a romp. Intelligent and articulate? That goes without saying. Convincing and authoritative? No. A good editor might pare the material down to a salvagable level by dumping a good third of the text, but even then I have my doubts. This book, unlike his others, is likely to date quickly. John Haught is the better communicator on the fault line between religion and science
Posted by Gavin R at 21:51