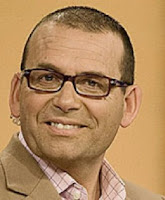 The GG is, as the name suggests, of Indian heritage. Interviewing the Prime Minister, Henry asked, out of the depths of his personal ignorance, whether Satyanand was "even a New Zealander."

The GG was in fact born and raised in New Zealand.

Compounding his stupidity, Henry went on to ask whether the next holder of the office - effectively the head of state - might sound and look more like a typical New Zealander.

What, I wonder, does a typical twenty-first century New Zealander look like? I suspect Henry thinks he (the choice of pronoun here is deliberate) looks and sounds a lot like him, a smug Pakeha (European) guy with a British surname and an old school tie in his closet.

Previously Henry has described the inspirational Susan Boyle as "retarded," pointed out facial hair on a female interviewee and wondered aloud whether anyone actually cared about the torture of prisoners in Afghanistan.

Why is this clown with congenital foot-in-mouth disease still on payroll at Television New Zealand?
Posted by Gavin R at 17:30