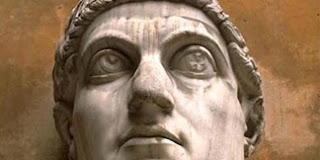 Rome is the second episode in Christianity: A History, which focuses on the appropriation of Christianity by the Roman state from the time of Constantine. With masterful choice the producers chose a politician to front the programme, and a lapsed Catholic at that, controversial former British Tory cabinet member Michael Portillo. A more appropriate choice to discuss the conniving Constantine would be hard to imagine.

The film begins in the wilds of Cappadocia, then moves to Ephesus before training its gaze on Rome and Constantinople. I was waiting for the usual lineup of suspects to appear with expert cameo commentary, but in fact the producers scorned the familiar faces and instead delivered various Turkish and English academics and Vatican officials. It made for a refreshing change.

The underlying questions: should the church be in bed with the state? Was Constantine's adoption of the church a good or bad thing? The answers are more muddied in Europe than America or Australasia, but Portillo ultimately gives Constantine - and his legacy - the thumbs down. Who'd have thought a Conservative politician would have been capable of such a thing? Eusebius is described as the emperor's PR agent, and I nearly stood up and cheered when Augustine of Hippo's dubious contributions to church history - the elevation of the papacy and the travesty of "just war" theory - were raised. Striking shots of St John Lateran in Rome, the Hagia Sophia in Istanbul and the bizarre sight of frocked bishops in the British House of Lords, add to the impact of the programme.
Posted by Gavin R at 13:50