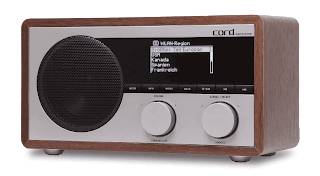 I'm of the generation that fiddled with the shortwave dial in its callow youth, tuning in to faraway stations that faded in and out and changed frequencies frequently.  Despite the whining background noise, there was a feeling of connectivity, the wonder of listening in to something beyond the mundane offerings of local AM radio.

Well, that's well and truly history now.  Internet radio has been around for years, but the magic is somehow watered down when its pumped through a tinny laptop speaker, a pair of ear-buds on a tablet, or even a couple of plug-in speakers.

So I finally relented, well crumbled is more like it, at the sight of a reasonably priced combination Internet, DAB and FM radio.  It looks like a radio, and it sounds like a radio, sitting proudly on the bench-top, ushering in each new day with music, news and drama from whichever point on the planet currently takes my fancy.

And the truly weird thing is that even some local stations sound better via the Internet.  A lot of Auckland stations, for example, offer poor reception South of the Pukekohe hill, but now... no problem.

But the romance is still in those offshore stations.  On my favourites list:
To be continued.
Posted by Gavin R at 23:32