The Revenge of Good King George 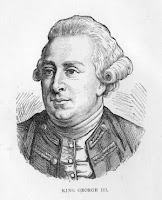 In the 1770s the American colonies revolted, thereby defying God, King and Country, changing the timeline of history forever and opening up a trajectory that would ultimately lead to hamburger franchises, conservative talk radio and reruns of The Beverly Hillbillies.  True patriots of the time, loyal to the Crown, were subsequently forced to flee across the border to His Majesty's Dominion of Canada, where they reestablished themselves in villages like Pugwash, Nova Scotia.

Since then the story has been a dismal one, particularly from the perspective of the Queen's English.  Spelling terrorist Noah Webster willfully attempted to turn the language upside down with devilish perversities and infelicities which were then exported back to bastardise the Mother Tongue.  Even the Australians, ever a nation of star spangled suck-ups, were carried away with the dastardly plot, and dropped the anointed letter 'u' from colour and labour, as even a cursory check of the Macquarie Dictionary clearly demonstrates.

But now there's a reverse trend underway, according to a reserved but cautiously gleeful report from the BBC.  It seems Americans are warming - and not before time - to "Britishisms."  Metrosexuals and gingers are meeting on weekends in trendy gastropubs for a bit of a chat up and even perhaps indulge in an occasional spot of snogging.  Spot on!

Resistance would be gormless.