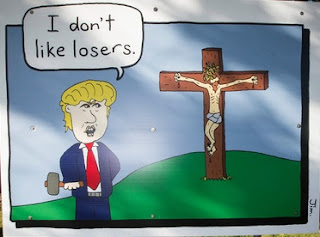 Donald Trump excites a lot of attention well beyond the borders of the USA. I still haven't met a Kiwi of whatever political persuasion who can believe that this man could actually become president of the most powerful country on earth.

The billboard shown is now on display outside St Luke's Presbyterian Church in Auckland.


"For those of us at St Luke's, the cross is about politics. Jesus was killed - violently, publicly and shamefully - because he spoke truth to power and confronted the leaders of his day about their treatment of the outcasts.

"To the Trumps of his day, and to those who see winners as having money and power, the Jesus of the Bible was a loser who associated with those rejected by society. And he died broke.

"Jesus had an alternative vision of reality, however. He was a person who sided with minorities and those who were most vulnerable, and it was this that got him killed."

You can read the story in today's NZ Herald here.