Why do I loathe John Piper? Let me count the ways... 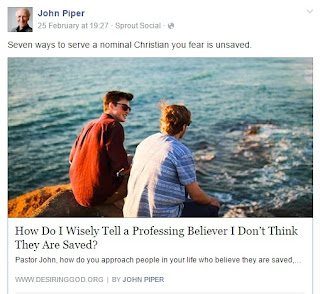 John Piper is worried about all those Catholics and Lutherans in Minnesota. To make his exclusionary fanaticism more acceptable, he adds in a comment about Baptists too (he's a Baptist preacher), but we know what he means. Here's part of his wonderful advice on Desiring God.


I live in Minnesota and to be Minnesotan is almost to be Lutheran or Catholic. And those churches just as much as any Baptist church in the Bible Belt are shot through with people who think they are Christians when they are not.

Contrast this with an article by Anthony Le Donne on The Jesus Blog. Le Donne asks a question many of us have been wondering about; is Donald Trump a Christian?


We should not commit the sin that American xenophobes did in claiming that Obama is not really a Christian (such thinking is still prominent among Trump’s following). Rather we should acknowledge that there are Christians who do not, by their words or actions, represent Christianity.

Which is a generous and nuanced position.

My question: is John Piper a Christian?