Ninety-eight and still outpedalling the pack 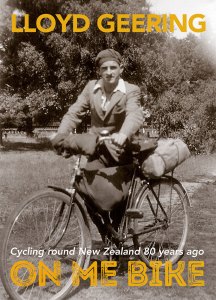 Murray Rae was one of the fine people whose classes I took during my time working on a theology degree at Otago. Otago's most famous son, theologically speaking, is Sir Lloyd Geering. During my studies, however, his name was verboten, which seemed a tad strange. Idiot savants from Dallas Seminary might be counted among course readings, and you had to chuckle when we were served a prophylactic chapter from Bart Ehrman's New Testament text (the least controversial that could possibly be found), but Geering? The invisible scholar. You definitely got the impression that the 'management' didn't approve.

So it is with some delight I discovered this recent exchange in the Otago Daily Times. Round 1: Journalist Ian Harris ponders the God question.


Many things that are real in human experience can never be subjected to mathematical formulae, laboratory testing or microscopic analysis - whether you love your husband or wife, for example, your response to a movie or concerto, a war or a disaster.

Those responses flow from your thought-world and the values you live by, not science.
Would anyone argue they're not real?

That is the order of reality to which God-talk belongs.

As English novelist Iris Murdoch neatly sums up: "God does not and cannot exist'' (that is, as a separate, objective being).

"But what led us to conceive of him does exist and is constantly experienced and pictured. What we need is a theology that can continue without God'' (again, as a separate, objective being).

In other words, God happens in our heads (or not, as the case may be).

Provocative stuff, I guess. What will the people in pews make of it? But fear not; in due course cometh Round 2. Murray rides to the rescue.


He says that "ideas of God'' are generated by human thought.

I take him to mean, and I may be mistaken, that God has no reality apart from these ideas.

If that is what Mr Harris means, then he fails, after all, to uphold the principle with which he began, the principle of God's ontological otherness.

Mr Harris' "God'' belongs to the same order of being as worldly reality, in this case the reality of human thought.

Here he parts company with the Christian tradition.

So there! I hope that's all sorted now. You can tell Murray is a theology professor by his deft use of the expression "ontological otherness." Try dropping it into the conversion next time the nice folk from The Watchtower come knocking.

Lest you think this was a knockout, Round 3 goes to Lloyd Geering.


Ian Harris serves your readers well by drawing their attention to what is happening at the leading edge of changing religious thought.

It is surprising, therefore, that he has been taken to task by Murray Rae (ODT, 19.2.16) for suggesting that all talk of God should be taken "out of the world of the human sciences and into the world of human thought''.

Even more astonishing is Prof Rae's appeal to the traditional understanding of God "as the Creator of all things'', without acknowledging that this idea is not a scientific one but one found only in the very world of human thought referred to by Mr Harris.

However much it may continue to be expounded by professors of theology in the great universities, as Prof Rae claims, the fact remains that whatever explanatory value the idea may have had in the pre-scientific past has simply vanished with the advent of the scientific discovery of the evolutionary process that now explains the universe.

Not that I'm taking sides, oh gosh, golly no. But Geering, along with Don Cupitt, are two 'radical theologians' that are well worth listening to. Geering, at age 98 - we should all be so lucky - is still able to run rings around lesser mortals. His latest book is called On Me Bike: Cycling Around New Zealand 80 Years ago, a nice counterbalance to his many books on religion.