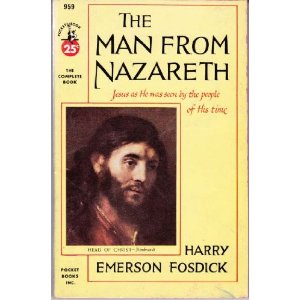 There isn't much that's new under the sun, to echo Ecclesiastes, and the mythicist debate is no exception.

1949 was, as they say, "a powerful long time back."  In that year Harry Emerson Fosdick published his The Man From Nazareth.  It appears that the peril of Jesus mythicism was weighing on his mind at the time, and the very first chapter, A Real Man, not a Myth, takes up the cudgels.

I doubt Bart Ehrman bothered to consult this classic text before producing his own book earlier this year; it gets no mention in his bibliography.  Yet Fosdick's goal was remarkably similar to his own, to present a lucid, comprehensive case against mythicism aimed at the general reader.  This he accomplished in this single, passionately written chapter.  Granted, in 1949 scholarship lacked many of the insights it has today in addressing issues like these, but Ehrman could have done a lot worse than simply updating that text.  As it was he did do a lot worse.

So if you want to read a decent argument against mythicism, Fosdick is in the public domain and free to download (the Kobo store is one source).  Cut him some slack for having written over sixty years ago - there are weaknesses as a result, but in large part the case made then is much the same today.
Posted by Gavin R at 22:15