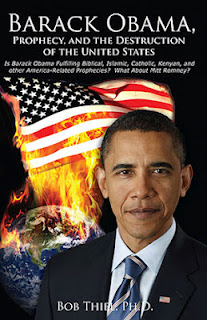 Just in time for the presidential election, that "award-winning researcher, biblical scholar and one of the world's foremost authorities on end time prophecies," Dr. Bob Thiel, has launched a new book entitled Barack Obama, Prophecy, and the Destruction of the United States.


This book explains about how, by virtue of his background and policies, Barack Obama is fulfilling, and will continue to help fulfill, various prophecies that will lead to the destruction of the United States.

Yes, I know most readers have no idea who Bob is, despite being an award-winning researcher, biblical scholar and a foremost authority - obviously you've all been out of the scholarly loop.  Bob is superbly qualified to write about this kinda stuff, what with being a published naturopath, and holding a mail-order ThD from Kochi, India.  He is best known for his apologetics on behalf of the Roderick C. Meredith sect, the Living Church of God, which produces the Tomorrow's World TV program and magazine.


[T]hough not ordained as a deacon or elder, hands have twice been properly laid upon me for the Holy Spirit (once upon baptism & on 12/15/11 for a "double-portion" of the Holy Spirit) and I try to do what it seems God wants (1 Timothy 4:14-16). On 12/16/2011, evangelist Richard Ames publicly prayed that I would continue to do the work of God as I had been doing (internet, writing and advising LCG leadership, radio, etc.), which also received "Amen" concurrence from evangelists Roderick C. Meredith and Douglas Winnail. Richard Ames later on 12/16/11 called my writings, including my upcoming church history and prophecy book, an "additional witness."

What greater recommendation couldst thou want!?  Eat your heart out Bart Ehrman!  But wait, there's more!  This essential tome is currently available free on Kindle, but only if you act now.  After today (Saturday, US time) you'll have to shell out a few bucks.

To be honest, I thought I could ignore Bob once I ditched the old Ambassador Watch blog, but this is just too bizarre to overlook.

(Thanks to Douglas Becker, who pointed out the availability of Dr. Bob's newest dopus opus.)
Posted by Gavin R at 07:25