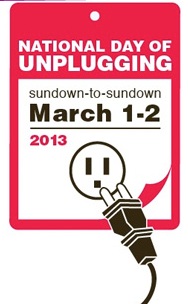 The Sabbath isn't something we hear about in the news too often.  Despite an awful lot of misinformation about the subject, at its core is a message about stepping outside the everyday routines and obligations that so tightly bind us and, hopefully, centring ourselves for a space of time each week on those realities and experiences that lie outside the mundane. There's many a slip however, as the saying goes, between the cup and the lip, and the Sabbath can end up as merely another burden that restricts rather than liberates.  On this matter I have some small experience as a former member of a Sabbath-keeping Christian community from back in my salad days.

Which is a long-winded preamble to talk about the National Day of Unplugging, which I first heard about just this week, and begins Friday evening 1 March and runs through the following twenty-four hours (corresponding to the Sabbath hours).  The idea, originally an initiative in the New York Jewish community, is to turn off the tech - the cell phones, laptops, tablets, PlayStations and assorted iThings, and reconnect with non-virtual reality.

Gotta say, I think the idea has it's merits.  Those people who have gotten involved - and it's an idea that seems to have seeded well beyond its original roots - seem to have been (to use a word I don't use lightly) blessed. Blessed by opting out from Twitter, Facebook, email, texts and needless phone calls. Blessed to interact with real people, family and friends. You've also got to suspect that their stress levels dropped a couple of notches too.

So I've added it to my calendar this year. It's one "Jewish Holy Day" I don't mind adopting! Friday the 1st from sundown through till the same time on Saturday. If the idea appeals to you too, regardless of your religious tradition (or lack thereof) check out the links below.