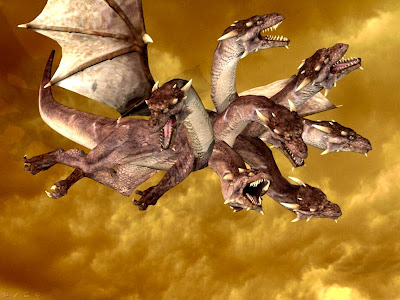 Scott Bailey makes a basic point on his excellent blog about the last book in the Christian Bible, sometimes known as The Apocalypse.

You can always tell whether a commentator on this book has even the most basic knowledge of their subject by what they call it. The correct title is Revelation, most definitely in the singular. Drooling poseurs invariably call it Revelations, in the plural.

It might seem to be a small point, but let's face it, if some nincompoop dilettante can't even get the name right, what are the chances they've got anything else right?

Which is exactly the point Scott makes. (The particular egg he refers to believes that dragons are real, and the Bible proves it!)

Of course, just because somebody can get the title right doesn't mean they have a clue about the book itself either, but at least they're approaching base one.

There was a certain philandering televangelist of fond memory who used to contest the full name as given in the KJV: The Revelation of St. John the Divine. His point was that John would never have called himself divine, or assumed such undue honours. Poor Ted (oops, gave that away...) simply didn't understand the difference between an adjective - which he took it for - and a noun - which was the translators' intent. Back in the 1600s divine was simply a synonym for theologian - presumably reflecting the superhuman seer-like characteristics needed for torturing significance out of those recalcitrant texts!
Posted by Gavin R at 11:43