The news from the nice people at Christian Today (not a typo for the better-known Christianity Today) is that the Bible readers market continues to be dominated by the worst translations on offer. 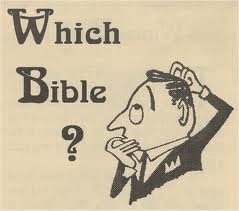 Sales charts from the ECPA going back all the way to January show that the NIV, NLV, KJV and NKJV have consistently wrestled for the top spot among buyers.

No sign at all of the NRSV or any of the excellent Catholic alternatives. Perhaps not surprisingly, the people who buy Bibles tend to choose comfortable (and deeply flawed) options. The only half-decent offering appearing on the lists - at CBA's no.8 - is the Common English Bible.

Daniel Wallace of (teeth gritted) Dallas Theological Seminary is quoted as saying that the venerable KJV remains his top pick, citing its "elegance and its cadence and the beauty of its language."


Despite the number of translations available and the Bible being the world's most printed and widely distributed book, surveys have consistently showed that many Christians rarely read the Bibles they own.

Nope. Best to stick to those handy dandy proof texts, and not to wander too far off the beaten path. After all, that could lead to dangerous pitfalls like having to think for oneself!

Presumably all this says something about the demographic of the Bible-shoppers who patronise these two sources. Sadly it also says a great deal about the state of the general Christian demographic in the US, and to be frank, other English speaking countries won't be a lot different.
Posted by Gavin R at 11:41