International Investment Banker Robert Lawrence Kuhn is one smart pilgrim.  The host of Closer to Truth who is sometimes described as a "public intellectual", goes looking for 'elusive answers' to 'timeless truths' about cosmos, consciousness and God.  In a recent episode ("Does God Make Sense?") he quizzes a range of thinkers: Richard Swinburne, Alvin Plantinga, Daniel Dennett, Huston Smith, Michael Shermer and representatives of Hindu and Islamic perspectives (Varadaraja Raman and Seyyed Hossein Nasr.)  It's quite a cast (though somebody should really tell him about Don Cupitt...) 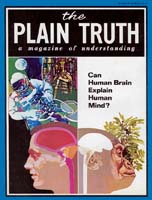 Who'd have thought that this one-time protégé of windbag Bible preacher Herbert W. Armstrong, and assistant to his jet-setting son Garner Ted Armstrong, would end up with a sophisticated personal credo of "passionate uncertainty"?  This is the man who co-wrote the 1970s 'brain/mind' articles in the Plain Truth, and went on to then run the PT newsstand programme! It just goes to show that we can all outgrow our youthful follies, I guess.

My only question now though is, all considered, how come he left Mike Feazell's name off his list of latter-day luminaries?
Posted by Gavin R at 21:00