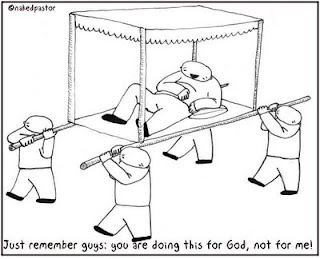 There are more than a few readers here who know what it's like to be cast out of the Kingdom, excommunicated, disfellowshipped...  That's something I share with them.  My terrible sin was questioning the authority of the imperious church leader who, it turned out, had "feet of clay."

Whether the mullahs get to you first, or you precipitate things by confronting them (as I did), the result is pretty much the same.  I've never been divorced, but I imagine the trauma you go through is similar in both.  Church membership - especially in more sectarian settings - is about identity as well as community.  Reinventing yourself is no easy thing.

So I found myself empathising with Shelley Branine.  She and her husband were recently dumped from membership of their church.  The sin?


The foundation crumbled when we started asking questions about how money was being spent and the lifestyle of some of the leaders doing the spending. We weren’t the only members wondering, just the only ones brave enough to ask. I was shocked to discover that such simple questions would cause so much anger, fear and defense. Our intention and demeanors were not harsh or critical. We simply and politely asked for answers.

So they kicked us out.

This is a tale oft told.  The last line of Shelley's post is, though, the one that struck me.


But regardless of all of the hurt feelings and confusion, I’m thankful, because I am better for it.

Abusive churches are lethal, no matter how much we have invested in them - study, financial, even (tragically) family.  Abusive churches want - and need - compliant, unquestioning members.  Perhaps in the past these churches tended to cluster on the sectarian fringes, but today, like Shelley's, they operate close to the evangelical mainstream with largely unaccountable 'pastors'.  If they were plumbers you'd call them 'cowboys'. You only have to read Tanya Levin's account of life in Hillsong to recognise the same pattern, and Hillsong is "respectable" in the eyes of the evangelical mainstream.

It's clearly much easier not to get involved in a rogue, personality-driven church than to have to tear yourself free much later.  The message has to be, buyer beware!  But, as Shelley has discovered, better late than never.  You'll be the better for it.
Posted by Gavin R at 10:17