Living Fossils of the Herbozoic (1) 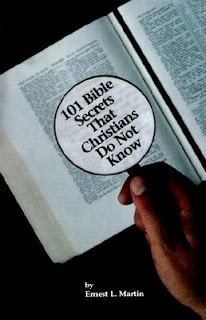 Thumbing through the May/June issue of the BAR I nearly had a coronary, right there in the Borders store in Albany.  A double shot of Ernest Martin in two full page ads.

The first was for "The Holy Bible in its Original Order" (page 7).  This volume had its genesis in the desire of Ernest L. Martin (often referred to as ELM) to 'restore' the Bible to its 'original' order.  The initial idea, according to James Tabor, was to gain permission to reprint the long forgotten Rotherham translation in an appropriately reshuffled edition.  The 'original' order for the New Testament was, according to Martin:

You learn something new each day.

I'm not sure how ELM worked that out, or how the book order could be considered such a significant issue, but he self-published a large tome on the subject (The Original Bible Restored, which weighs in at over 500 pages and is still procurable on Amazon).  There was strong support for the idea among his followers, disenchanted adherents of one-time ad man turned apostle, Herbert W. Armstrong.  (Martin had been Professor of Theology at Ambassador College prior to the convulsions of 1974, and one of Herb's most influential lieutenants.  His doctorate - in education - was also from unaccredited AC.  Wikipedia calls him an archaeologist, but that's definitely a stretch.)  Eventually it was decided to go it alone with this 'original' Bible, which was a mistake.  Martin died before the translation project got off the ground.

Loyal supporters decided to continue with the project which, some years ago, fell into the hands of Dr. Tabor (UNC, Charlotte), another former Ambassador lecturer and disciple of Armstrong.  There's little indication however that "The Original Bible Project" will ever now see the light of day, with Tabor's last web entry advising progress on The Transparent English Bible dated November 2009.

But fear not little flock!  Into the breach stepped Fred Coulter, an ex-Armstrong minister, and one of the few who'd bothered to learn Greek at AC.  Fred released his own 'original order' New Testament in 2004, and later bought the rights to a KJV clone to bung together the Old Testament part (after, I assume, water-boarding the appropriate proof texts till they surrendered) with his New Testament.  The result was the very expensive item ($119.50 or $99.50, depending on the cover) advertised in the BAR.  My advice?  Save your money.

So far nothing new.  This 'unique' Bible has been promoted in the pages of the BAR for a very long time.

No, the near coronary occurred when I flicked over to page 13.