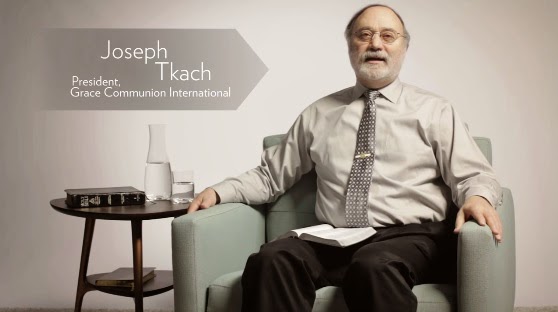 "Our denominational governance is yet another major change we are in the process of making. The hierarchy of church structure is being modified to feature a board vested with authority both to appoint and to remove the president/pastor general. We also plan to limit the length of the pastor general’s term to a specified number of years. Until now, the office of pastor general has been a lifetime appointment made by the previous pastor general."


Eighteen long years have gone by since those fine intentions were voiced. 2015 is the twentieth year Joe has warmed the throne.  Twenty years. So a simple question for Joe and those he deigns to share leadership with in Grace Communion International as we enter 2015.

Where are we up to with this?

Back in the day - when I was still running the precursor website to Ambassador Watch (then named The Missing Dimension) - which in turn morphed into the blog of the same name (archived here) I editorialised on Joe's leadership in a piece called "The Apostolic Chair". This was probably written circa 2002 - but that's a guess. The quotes are dated, and I wouldn't write it quite this way now, but more to the point. what's really changed in the Tkach church? One thing seems clear: Joe still has a vice-like grip on the reins.

Americans elect their president every four years, and wisely limit any one incumbent to two terms. The same cautious approach is evident in the constitution of many churches. A church, like a nation, should not become the personal fiefdom of any individual, no matter how sincere or gifted they might be. Yet Pastor General Joe Tkach was appointed, not elected. Moreover he's already served a lengthy term as spiritual leader of the Worldwide Church of God, and apparently has "life tenure". Doesn't that sound more like a fringe cult than an evangelical denomination?

Almost all churches, including related movements like the Church of God (Seventh Day) and the United Church of God, have systems in place that hold their leaders accountable to the membership. Church presidents serve a limited term. Not so the WCG. Joe Jr. (he prefers to be addressed as Doctor Tkach these days) holds the very same title and office that Herbert W. Armstrong held. And while Joe is happy to trash any number of church traditions and doctrines from the past, he shows no enthusiasm for seeking endorsement for his position as the church's top dog. No General Conference exists to provide a counterbalance to the Pastor General's authority. The power of the ministry has been shown to be severely limited: stand up to Joe and Co. and you're likely to become a "pastor without portfolio".

The traditional argument that the Pastor General is accountable solely to Christ won't wash. The theology on which that particular bit of self-deception was based has long since been swept away in the flood waters of change. Has Joe heard about "the priesthood of all believers"? His friends in the wider evangelical community certainly have. In practice, "accountable to Christ" means not accountable at all.

But it gets worse.  Legally it appears that the Worldwide Church of God is still "privately owned", and Pastor General Tkach is "sole proprietor". Caught off guard in a radio interview, he was asked what would stop him from just taking the money and leaving. The only reply he could come up with was that his family would stop him.

While Tkach might deny that he "owns" the church, with the current legal structure of the organization the reality is that he can hire and fire all board members at his personal discretion with absolutely no reason given. That's in writing. He can do whatever he wants with the corporation as long as it complies with government rules for a non-profit organization.

That things don't have to be this way was demonstrated recently by an independent Church of God congregation in Tulsa. The Journal, May 2001, reports the ordination of new pastor Ray Kurr. These Sabbatarian Christians have decided to bring the terminology of ministry into line with the service-oriented function originally intended.  "Minister" refers to all church members, since ministry ("serving") is the responsibility of all Christians. "Elder" refers to mature members of the congregation. "Pastor" refers to the job of leading the congregation

Ray Kurr comments "I showed that a pastor does not get between members and Jesus Christ." The article continues "In other church groups... a pastor had to grant permission for the general membership to do many things. 'As a pastor I have no intentions to behave in such an oppressive manner. If the Holy Spirit is moving you to benefit other churches with special music or take a group of friends of the congregation to help at the local shelter, just do it.'"

Joe might regard the members of this local church group as "legalists" due to some of their doctrinal beliefs. Yet these people have a fuller grasp of the freedom of the gospel than the top leadership in Pasadena demonstrate. Here's what one member recently posted on a news board:

The ministers have their marching orders and you will see more and more of this coming up soon... the subject of "days" [to worship on] seems to show the most clearly how things are being done...

We were given the right [for local churches] to choose the days ourselves. No real restrictions were placed on us and I felt Wow! this is a real empowering of the people. Well, it hasn't turned out that way. The clear motive now is a complete move from our past traditions to mainstream ones. The people may have chosen to keep the older ones but the ministry are to move us along. So there really wasn't a choice after all.

This is not empowering the people. One leading evangelistic advisor, I believe he is from Australia, said that a church should be full of lots of "ministers" and one "enabler" [something Ray Kurr understands]. The level of control on the WCG members is not unlike the Roman Catholics or even the Mormons for that matter.

Empowering the people is a scary thing. It means that you will not be able to control everything the way you would like. But maybe what this produces is something wonderful for the people.

Here's what Michael Feazell said back in 1996, speaking to a conference of regional pastors.

"The church needs to be a priesthood of believers... It needs to be doing ministry. Everybody in the church has a stake in that--whether it's women, men, teens or children."

Stakeholders must have a voice. They are not powerless, passive observers.

The simple truth may well be that Joe doesn't trust the church he presumably serves. He won't risk relaxing the reins lest people come up with ideas he doesn't endorse. Perhaps Joe considers himself indispensable. Perhaps he's a control freak. Could it be that he is unwilling to lose his comfortable sinecure?

Pastor General Joe has been chief shepherd of his dwindling flock for far longer than is decent without, at the very least, endorsement from the membership. How long will he remain on his pontifical throne? (even the pope is elected by a college of cardinals). Will he be Pastor General for life - a religious version of Fidel Castro?

"If your church is a spiritual detriment to you, then you should consider finding another one... When the leader of a church indicates that he is God’s unique messenger or special representative in comparison with other Christian ministers...  then you have another example of a church that is spiritually detrimental to its members."

Wise words. But what about churches where the leaders have safely elevated themselves beyond the influence of the members? A church, for example, that permits only token involvement of it's members in governance at either local or denominational level? How can Feazell justify the office of Pastor General and the hierarchical structure of the church in light of his own statement?

Tkach is on record as saying: "This fellowship has always been Episcopal, which is hierarchical..." Perhaps so. But this fellowship had always been Sabbatarian too, but that wasn't allowed to stand in the way of change. Even if an "Episcopal" model is to be used, there would need to be a long hard look at the parliamentary procedures actually used by the groups like the Episcopal Church; procedures which do indeed involve representative bodies of lay members at all levels.  The Worldwide Church of God is out on a limb when it claims "episcopacy" as some kind of precedent for leadership by a clique or self appointed oligarchy. It is no such thing.

Joe has been single-minded in his efforts to inveigle his way into the evangelical mainstream. But despite cuddling up to evangelical leaders, his leadership style arguably has more in common with Louis Farrakhan than Billy Graham.

They used to say in Pasadena that the only thing that would topple Herbert Armstrong from his throne would be the Second Coming.