Jazz? Not my first choice in musical genre, but I'm willing to make an exception for Taupo, the work of Brian Smith and friends. Some old boys got together to record these ten tracks back in 2007. Included is that unintentional minimalist anthem "It Ain't Necessarily So" from Porgy and Bess. Here's what the Marbecks website has to say. 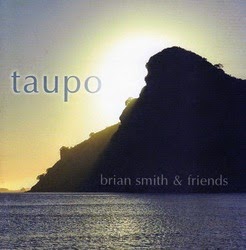 'Taupo' is a fine new recording of smooth and sophisticated sounds from New Zealand tenor "Moonlight" saxophonist, Brian Smith.
'Taupo' was the product of a day session at York Street Studios, Auckland in September 2006, and later mixed at Muscle Studios Taupo Bay, in the Far North. The title derives from this most beautiful location and is also featured in the cover artwork..
Along with leader Brian Smith the album features some of New Zealand's most talented musicians. Billy Kristian (bass guitar), Kevin Field (piano), Lance Su'a (guitar), Kevin Haines (bass), Kim Paterson (trumpet), and twenty year old sensation Alain Koetsier (drums).
Brian Smith started to make his mark in Auckland New Zealand in 1958. and apart from a stint in Australia working on the Gold Coast for 2 years, he established himself as an in demand tenor player backing local & touring musicians.
He moved to London in 1964, performing at Ronnie Scott's and working & touring with such names as: Humphrey Littleton, Alexis Korner, T-Bone walker, Georgie Fame, Alan Price, Annie Ross, Bing Crosby, Mark Murphy, Jon Hendricks, John Dankworth, & Tubby Hayes. He was a founder member of 'Nucleus' which won the European Band competition in Montreaux in 1970, resulting in gigs at Newport Jazz Fest and tours of Italy, Germany, Holland, and America.
In 1969 he started working in the Maynard Ferguson band, staying with them until 1975 including touring and recording. He also backed acts like Nancy Wilson, The 4 Tops, Gladys Knight & the Pips, Donovan, Dusty Springfield, sandy Shaw and Lulu.
Brian returned to New Zealand in 1980 and has since been kept busy recording, writing and performing on tours with a huge list of top national and international stars. He remains one of New Zealand's most sought after musicians.
Along the way he has recorded many albums non the least being the New Zealand No 1 selling album 'Moonlight Sax' which sold over 40,000 copies. Followed up later by 'Moonlight Sax II'.

The YouTube clip below, made in 2012, gives an indication of Brian's work, though the album is way, way better!