An Escalation of Outrage 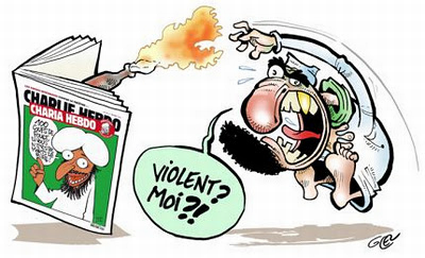 Most of us rub shoulders with Muslims on an almost daily basis, whether we're aware of it or not. They seem to me for the most part fine people, focused on working hard to build a good life for themselves and their families. As immigrants (in the main) they also have the difficult job of adjusting to a very different culture. Ours no longer defers to religious sensibilities. Not Catholic, not Evangelical, and not Muslim. Secularism and freedom are non-negotiable.

I am a descendant of non-English speaking immigrants. They had the misfortune to arrive in New Zealand from Germany just in advance of the Great War. Their children then grew up in the shadow of World War II, tormented in their turn by the jingoism of those times, the abuse, the bullying. Their response was all too often to keep their heads low, anglicising  their names, changing their religious affiliation, and sometimes claiming a different family origin (Danish was a little more acceptable). By and large they assimilated quickly (there didn't seem to be any choice) becoming "more Kiwi than the Kiwis."

And then there were those who toughed it out through the pain and confusion. It came at a cost, not least in mental health.

One can only feel for the many, many members of the Muslim community who will be truly horrified at today's events in France. The terrorists - murderers - have not advanced the cause of Islam one iota. This is an 'own goal', and it has been scored at the expense of members of their own community trying desperately to participate constructively in their adopted societies. While outrage may be a natural reaction, it should not be directed at these people.

Outrage is what caused this situation in the first place.
Posted by Gavin R at 09:48