Does God Care for Dolphins?

Bob Brinsmead, the remarkable ex-Adventist theologian, makes a strong point about ecological awareness, commenting on Paul's words in 1 Corinthians 9:9-10 ("...in the Law of Moses we read, 'You shall not muzzle a threshing ox.' Do you suppose God's concern is with oxen? Or is the reference clearly to ourselves? Of course it refers to us...") 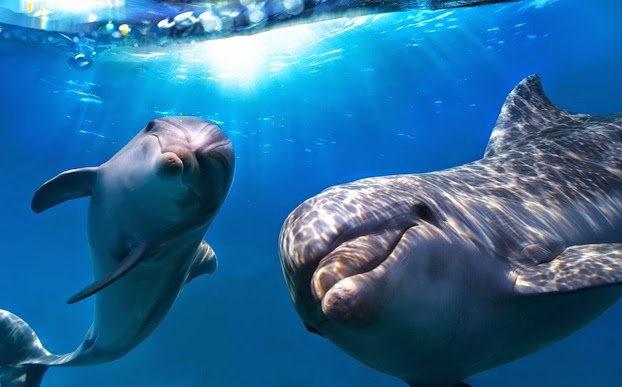 Brinsmead's point seems to be that, historically, Christianity had little concern about the world beyond the arena of mankind's salvation. Is he "on the dolphin's nose" with these observations? [1] If you think he was, what do we then do with the text? Was Paul correct or, as Bob argues, terribly wrong?

No I'm not really trying to be disingenuous (who, me?) Yes, I admit that I've read and enjoyed eco-theologian Norman Habel's book An Inconvenient Text for example, which I warmly recommend, and not only because of a shared upbringing in Antipodean Lutheranism. [2] But then I suspect very few readers of this blog have been much exposed to concepts like 'green' and 'grey' texts in the Good Book. (Strangely enough Habel doesn't refer directly to this particular Pauline text, but using his terminology this one would surely have to be darkest grey.) To be clear, lest anyone think this is all a bit of self-indulgent 'Christian bashing', neither Brinsmead (see note below) nor Habel were engaging in an atheistic rant, simply directing us to do some critical thinking.


[1] It's only fair to add that, at the time he wrote, nearly a quarter century ago, Bob had fairly rosy eschatological expectations about a humanity 'coming of age' grounded in post-modern appreciation of the human figure of Jesus. The reference for the quotations is Robert D. Brinsmead. "Jesus and a Post-Modern Worldview." Quest 9 (February 1991), 1, 5-10.
[2] Norman Habel. An Inconvenient Text. Adelaide, ATF Press, 2009. Unlike the volumes in the 'Earth Bible' series published by Sheffield Academic Press, An Inconvenient Text is both more affordable and written for a broad readership. For a specifically Lutheran (ELCA) perspective on eco-theology see David Rhoads's online article Reflections on a Lutheran Theology of Creation: Foundations for an Eco-Reformation.
Posted by Gavin R at 07:30